The ABC has revealed a leaked letter from Rudd to Prime Minister Scott Morrison, outlining the former prime minister’s efforts, ostensibly on behalf of concerned business figures, to secure greater quantities of the Pfizer vaccine.

The Morrison Government last week announced more vaccines would be made available in response to the Sydney outbreak. While it was initially misreported as extra doses, it simply brings forward already contracted supplies under a 40 million dose contract with Pfizer.

However, Pfizer downplayed Rudd’s role in fast-tracking shipments of vaccines to Australia.

The pharmaceutical giant said it was inaccurate to suggest any individual or third party had any role in the contractual agreements.

“The only two parties involved in these agreements are Pfizer and the Australian government,” a company spokeswoman told AAP on Monday.

“All agreements and supply arrangements, including dose planning are exclusively made with the federal government, and details of the agreement and discussions are confidential.

“All discussions on supply and procurement with the federal government are led by Pfizer representatives in Australia.”

Queensland had previously requested additional doses of Pfizer be released by the Commonwealth but was told only AstraZeneca was available. The Palaszczuk Government has since asked whether there is capacity at a national level to fast-track Queensland’s allocation of Pfizer doses.

State Health Minister Yvette D’Ath today said a shipment of 64,500 doses was expected tomorrow, and another 62,000 on Thursday, but there was still “very limited stock across Queensland”.

D’Ath said Queensland Health vaccination hubs were unlikely to take walk-ins – the state’s largest hospital had only 15 such opportunities available each day over the weekend – but people seeking their second dose should call ahead to be guaranteed an appointment.

According to the ABC, the business figures connected Rudd with Bourla, and the former prime minister sent Morrison a text message informing him of their pending Zoom conversation on June 30. It is not clear whether Morrison responded.

Rudd then detailed the conversation in a letter to Morrison, including how he had congratulated Pfizer on its efforts to combat the global pandemic. 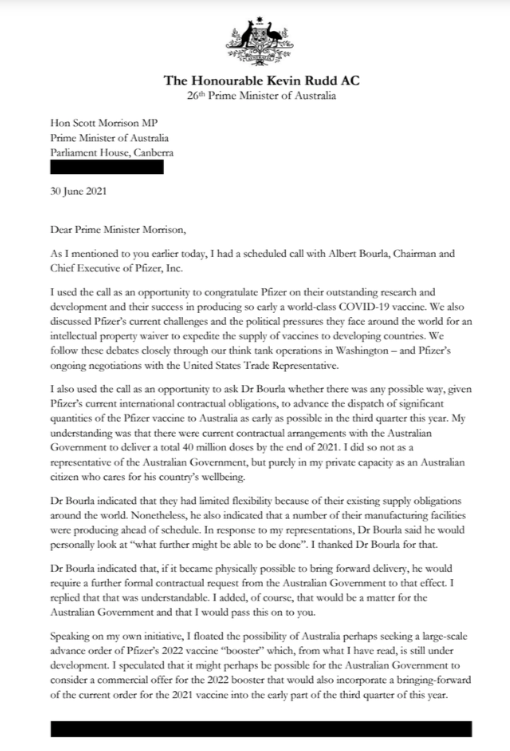 Kevin Rudd’s letter (above and below) to Prime Minister Scott Morrison about his approach to Prizer (Image: ABC)

“I also used the call as an opportunity to ask Dr Bourla whether there was any possible way, given Pfizer’s current international contractual obligations, to advance the dispatch of significant quantities of the Pfizer vaccine to Australia as early as possible in the third quarter this year,” Rudd wrote.

A spokesperson for Health Minister Greg Hunt told the ABC he had met with Pfizer Australia executives on multiple occasions “with a view to the announcement Friday on the timeframe achieved and at the level we had hoped for, which was the maximum that Pfizer had indicated might be available”.

“While we were made aware of Mr Rudd’s approach, we are not aware this approach had any impact on the outcome,” the spokesperson said.

“The Horizons document released in June referred to the expected base of 600,000 doses per week in August up to the one million per week figure which was achieved on an ongoing basis and we thank Pfizer for their continued support.

“We appreciate all contributions from those outside of government, even if they made no material difference to the outcome.”

“I suspect it wouldn’t take our greatest detective within the Queensland Police Service to identify who leaked that self-serving letter,” Dutton told 4BC radio on Monday.

“Kevin claims credit for many things, it used to drive his Labor colleagues crazy.”

The defence minister suggested the former Labor leader was inserting himself into the public debate because he was “bored to death in retirement”.

However, former Coalition prime minister Malcolm Turnbull publicly thanked Rudd for his efforts, tweeting that he was “staggered the vaccination of Australians was apparently not important enough to warrant a call” from Morrison or Hunt to the Pfizer boss.

Rudd, who also alerted Treasurer Josh Frydenberg to his efforts, had previously called for Hunt to be sacked over the slow pace of the vaccination rollout and has been a long-time critic of Morrison.

In a statement, Pfizer said all negotiations are between the company’s Australian representatives and the government, and it would be inaccurate to suggest “any third party or individual has had any role in contractual agreements”.