Out-of-town MPs once stayed in the famed Bellevue Hotel until it was allowed to fall into disrepair. In 1979, when the hotel was demolished, a building with an 18-storey tower opened next to Parliament House, offering accommodation, offices, meeting and function rooms to keep MPs on-site.

The building, now known as the Parliamentary Annexe, cost around $20 million at the time, and was given a $9 million refurbishment in 2000 but still retains its seventies appeal. It adjoins the sandstone parliament buildings, and, taking the high point next to the Botanic Gardens, is a beige landmark on Brisbane’s growing skyline. 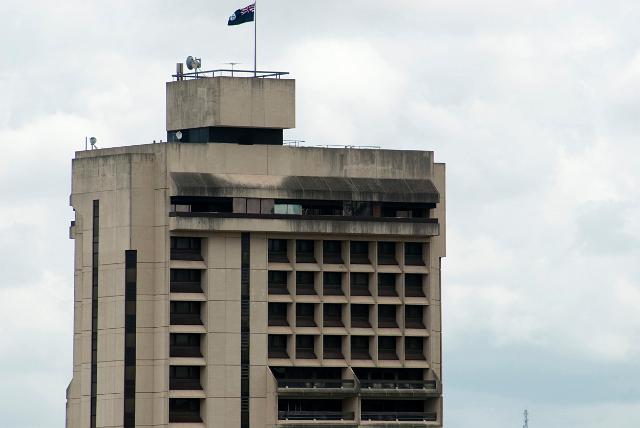 But in recent decades, the annexe has been falling apart, quite literally. Pieces of concrete have fallen off the façade, the windows risk dropping out too, while inside the essential services have become unreliable. The building is a lightning rod for criticism (and actual lightning) and one floor has already been closed off.

A $12 million program to replace the electrical circuitry, water pipes, and air conditioning units manufactured in 1974 is almost complete. But the next stage of work is more extensive and will require much of the annexe to be scaffolded, making it off-limits to MPs and staff for up to a year.

Politicians in line for three pay rises in 12 months, getting bigger every time

After a submission from Speaker Curtis Pitt and Clerk Neil Laurie, next week’s State Budget will include $41 million to repair the concrete façade and replace around 400 windows. While the annexe is closed, old and damaged soft furnishings will also be replaced, including the woollen carpets besieged by moths.

The repair bill is as much as it cost to build a new high-performance training centre for the North Queensland Cowboys, without the promise of more wins. But the exterior and interior of the annexe will keep their look, as any upgrades would have cost taxpayers even more money.

Treasurer Cameron Dick suggested the Liberal National Party, which built a new executive building across the road while in government, would have preferred a new annexe be built.

“I don’t support that but I do support making safe the building to ensure that it is in a suitable state to protect members and visitors to the parliament,” Dick said.

The funding will allow for work to be undertaken in 2022-2023, when MPs will have to be housed elsewhere.

When the LNP complained about the state of the annexe earlier this year, Dick told parliament he was open to reasonable suggestions but “the priority of the government will not be spending money on politicians”.

The Remuneration Tribunal has since overturned the MPs’ pay freeze to award a series of increases, which Dick has also had to factor into the budget.