The donation came in the early stages of a review of the regulation of lobbyists, who have changed the way the government interacts with companies and organisations. Anti-corruption advocates have consistently warned that such lobbying comes with integrity risks, particularly when combined with party donations.

Two days before Anacta’s donation, consulting firm KPMG donated $33,000 to Queensland Labor. It had previously been engaged by the government to assist with the COVID-19 response and its former partner, one-time Labor rising star Mike Kaiser, is now an acting senior bureaucrat in government.

Consulting firms have made big money from governments in Australia, particularly during the pandemic, often doing work that could be done by the public service. In Queensland, the line between public and private is sometimes blurry, to the point where Cabinet occasionally meets in different corporate headquarters to demonstrate the government’s commitment to economic growth and job creation.

The donations came early in a four-year term and ahead of electoral reforms that will see taxpayers carry more of the cost of election campaigns than donors. From July 2022, the government has promised to impose a $6,000 cap on donations to individual candidates, and $4,000 for parties, which is expected to restrict if not prevent future cash-for-access schemes.

However, Labor seemingly expects the networking to continue. It is currently advertising for a new director of Business Partnerships, on a three-year full-time contract, to “manage and grow the major donor program, sponsorship opportunities and annual fundraising events”. 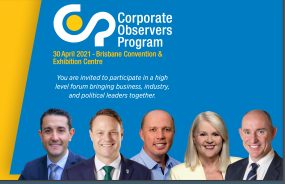 The director is expected to “grow business partnerships” and “build and maintain relationships with existing partners and supporters”.

While Labor also benefits from union funding, the Liberal National Party is almost wholly dependent on big business, and was restricted by the Palaszczuk government’s ban on developer donations. The LNP also received donations from lobbyists while in government and has its own cash-for-access scheme, the Corporate Observers Program. Unlike Labor, however, the LNP does not reveal which donors its frontbenchers have met with.

The Clerk of Parliament, Neil Laurie, recently warned that “some of the wider safeguards that existed prior to and immediately after the Fitzgerald inquiry and report have now been fatally weakened”.

In calling for a stronger Crime and Corruption Commission, Laurie argued that the media was less of a force, academics less interested in accountability issues, while professional organisations and stakeholder groups “struggle to deal with the increasing multitude of issues”.