Palmer, the wealthy political outsider based in Queensland, was behind radio ads that have aired in recent days warning that COVID-19 vaccines are linked to 210 deaths.

The ads come after the United Australia Party founder recently pledged support for former Liberal MP Craig Kelly who, like Palmer, has been publicly advocating for alternative COVID-19 treatments. Palmer will even bankroll Kelly’s attempt to retain his federal seat as an independent.

But critics of the latest Palmer ad fear it will further undermine public confidence in vaccines, having misinterpreted official data showing 210 people who were vaccinated have since died from a variety of causes. Some listeners heard it played repeatedly over a short period of time.

The Therapeutic Goods Administration said in a statement it was “seriously concerned” by Palmer’s campaign, having found only one case where an individual with vaccine-related thrombosis or any other related condition had died.

“Such misinformation, in the course of the COVID-19 pandemic, poses an unacceptable threat to the health of Australians,” the TGA said in a statement, vowing to write to Palmer and the radio stations responsible.

“Public figures have a responsibility to be factual and to not undermine our health through spreading misleading information.”

Some radio listeners complained to the Australian Communications and Media Authority, which referred them to Ad Standards, the watchdog in charge of industry self-regulation.

Ad Standards, however, advised that it only considers complaints that full under the various advertising codes and initiatives it administers. 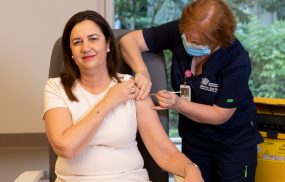 “We suggest that members of the public who have concerns about Mr Palmer’s statements get in touch with the Federal Department of Health or their Member of Parliament.”

The department would normally refer such matters to the relevant agencies, such as the TGA or medical professional bodies. However, given Palmer is not trying to sell anything, or pretending to be a doctor, their regulatory options may be limited.

With a federal election due within months, it remains to be seen what impact Palmer’s critics would have lobbying their local MP. The United Australia Party has failed in its most recent election campaigns.