In a report tabled in parliament this month, the CCC outlined how a 50 per cent gender equity target in the Queensland Police Service was miscommunicated to staff who then actively discriminated against would-be male recruits in an effort to succeed.

The CCC held closed-door hearings and took statements to examine recruitment practices between December 2015 and October 2018. It found women were selected in preference to men who had performed to a higher standard across entry assessments.

According to the CCC, around 2000 men were discriminated against over an 18-month period, putting a cloud over approximately 200 women who joined the force ahead of “more meritorious male applicants”. Six women were accepted into the academy despite not meeting the required standards.

But almost immediately, the investigation was criticised by the state’s Human Rights Commissioner, Scott McDougall, who cast doubt over the CCC’s understanding of the law. He said it was wrong to suggest there was unlawful discrimination simply because police failed to applied for an exemption to the Anti-Discrimination Act.

Today, Parliamentary Crime and Corruption Commissioner Karen Carmody, a barrister, smiled when asked in a committee hearing if she had any comment to make.

“I was a little surprised that the CCC undertook an investigation into that issue when there are so many other significant issues that I thought could perhaps have their attention turned,” Carmody said.

“But I don’t know the full details. I wouldn’t have viewed it as major crime or major corruption if I had been also mindful of the anti-discrimination provisions that do allow you to discriminate on occasions.” 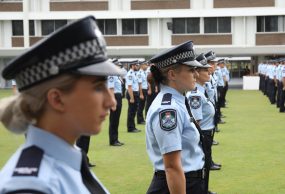 Carmody suggested there may be legitimate reasons for discriminating in recruitment, for example to build representation of indigenous people, those with disabilities or, in the case of police, more female officers to deal with issues such as domestic violence.

The discussion came during a public hearing of the Parliamentary Crime and Corruption Committee, which oversees the CCC with the assistance of the commissioner. The committee is completing a routine review of the CCC.

Carmody was also asked to comment on the CCC investigation into Logan City Council, which led to eight councillors being charged, and then sacked, only for the Director of Public Prosecutions to discontinue the case against them.

While Carmody made clear she did not know the evidence before the CCC, or the DPP, she believed the investigation itself had merit and said it was “not unknown” for charges to be dropped at a late stage.

Premier Annastacia Palaszczuk has said the Logan case can be considered as part of the review of the CCC, due to report in June, however public interrogations by the committee have so far been limited.