In a report on the sector, and tabled in State Parliament today, the Queensland Audit Office found some institutions fared much better than others last year. For example, all grammar schools increased their revenue  – and six of the eight actually improved their operating result in 2020.

“However, significant Commonwealth COVID-19 relief payments were received by five out of eight grammar schools during this time,” the report states, with the payments keeping Ipswich Grammar School and Toowoomba Grammar School from going into the red.

Brisbane Girls Grammar School was able to borrow $12.5 million – on top of $10 million the year before – while Ipswich Grammar School borrowed $8.95 million.

In tertiary education, Central Queensland University and Griffith University plunged into the red, with CQU worst-hit and having to borrow more than its deficit for the year ($35.78 million).

CQU had been heavily dependent on revenue from international students, whose absence forced the university to cut costs by closing campuses at Biloela, Yeppoon and Noosa.

“Central Queensland University took decisive action and was the first university to undertake an organisational restructure, resulting in 296 staff separations,” the report states.

“It entered into new financing arrangements, which included a $20 million Queensland Treasury Corporation overdraft facility (not accessed as at 31 December 2020) and a $70 million loan from the Australian Government for its asset purchases, with $35 million received in December 2020 and the remainder expected to be used in 2021.”

The report warned that universities “continue to face significant risks with the security of their funding” and four institutions expected another loss in 2021. Federal Government funding changes only compounded the loss of international student revenue. 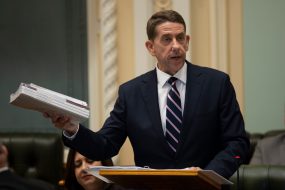 For state schools, embracing technology, with the benefit of State Government funding, helped sustain services and could change teaching practices for the longer term.

Across the sector, however, the report found a need for institutions to reconsider what they offer the community and whether it is sustainable. The ongoing pandemic gave institutions an opportunity to better understand the market.

“They should use this understanding to decide whether to offer the same services in the future or invest in others that are more efficient or of greater value to customers,” the report concluded.