After Scott Morrison again criticised Queensland’s proposal for a purpose-built quarantine facility at Wellcamp Airport in Toowoomba, Palaszczuk today said she was not giving up on the idea.

Morrison has repeatedly dismissed the Toowoomba proposal as lacking in detail, and this week suggested it was also too far from city hospitals and international airports. It has become the longest-running, inter-government policy stalemate of the pandemic.

But Palaszczuk insisted all Morrison had to do was divert international flights to Toowoomba – “his big plane has landed in Wellcamp before” – where travellers could quarantine before being released into the community. 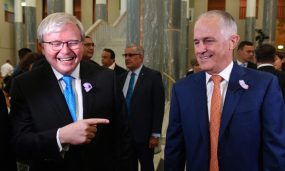 Amid ongoing concerns over hotel quarantine breaches, the Morrison government has agreed to work with the Victorian Labor government on a purpose-built facility in Melbourne. It would require government funding, whereas Wellcamp would be self-funded by the Wagner group and travellers who would normally pay for hotel rooms.

Palaszczuk said Morrison was being “a bit rich, cherry-picking” proposals when such serious issues were at stake. She argued regional quarantine could also boost economic development and Queenslanders wanted it, even if further consultation would be required in Toowoomba.

“He doesn’t need any more detail,” said Palaszczuk, who stopped short of accusing the Prime Minister of lying.

“The threshold question is are they going to allow flights to land into the airport, yes or no.”

With a federal election due within months, Palaszczuk suggested voters wanted to see the Federal Government co-operating with the States and Territories.

She criticised Morrison’s suggestion Australians might need a version of passport to travel interstate in future.

“It has never been raised at national cabinet, it’s another thought bubble obviously,” Palaszczuk told reporters in Brisbane.

“I would encourage those issues to come into national cabinet, or at least go into the federal cabinet and come out of federal cabinet with a proposal rather than just make things up.”

Morrison toured Queensland after the federal budget, ramping up the political campaign and prompting speculation he might call an early election.