The family of four were trapped when a tree, uprooted by the damaging winds, toppled onto their car and brought down live powerlines.

The family, including two young children, were travelling on Arundel Avenue in Nambour when the tree fell just before 6:00pm. The male occupant of the car recognised the danger posed by the power lines and instructed other family members to stay calm remain in the car while he called for help.

It took Energex crews more than two hours to be able to access the site and move the family to safety.

“[It is] never a situation anyone wants to find themselves in,” Rob Stalk from Energex said.

“Luckily for this family they obviously knew the right thing to do and that was to stay in the car.”

The band of storms swept through Queensland, bringing massive hail, rain and lightning to a vast area from the Gold Coast to as far north as the Central Highlands.

A family of four were trapped in their car for hours on the Sunshine Coast after a tree crashed onto their car and brought down live power lines.

The family, including two children, were travelling on Arundel Avenue in Nambour when the tree fell just before 6:00pm. They called for help from inside the car, with Energex rushing to the scene to shut-off the power. The family was freed after almost two hours.

Skies darkened over Brisbane late on Wednesday afternoon, as the Bureau of Meteorology (BOM) warned residents to take cover and secure their belongings.

Roads were turned into rivers, with rain causing localised flooding in Brisbane at Woolloongabba, Moorooka and Salisbury, stranding several cars.

TransLink reported major disruptions on a number of train lines, due to a faulty overhead powerline. 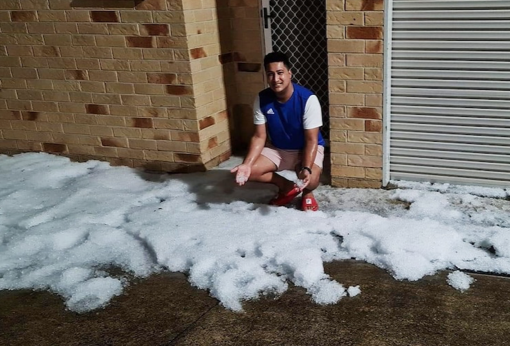 Hail after a storm in Maroochydore on Wednesday evening.(Supplied: Pramod Rana Chhetri)

Beenleigh, Cleveland and Gold Coast line trains were suspended, and TransLink warned of delays of up to 70 minutes as it organised alternative transport. More than 10,000 homes are without power in south-east Queensland.

A significant number of those outages are on the Sunshine Coast where a storm cell passed through about 6:00pm.

About 50 powerlines are also down across the south-east — the majority again on the Sunshine Coast.

A Kmart store at the Sunshine Plaza shopping centre at Maroochydore was forced to close after water began pouring through its ceiling during the deluge.

Energex spokesman Rob Stork said there had been more than a 100,000 reported lightning strikes across the region and it was not safe enough for crews to go restore power.

“Once it is safe for our crews to be out there, rest assured they’ll be out here getting the power back on as quickly and safely as they can,” he said.

The BOM issued a number of warnings after 5:00pm for damaging winds, large hailstones, and heavy rainfall in a number of areas including Redland City and parts of Logan, the Gold Coast, Sunshine Coast, Noosa and Brisbane City Council areas.

Thunderstorms near Cleveland, Nambour and northern Moreton Bay were moving east and would likely affect Maroochydore, Noosa and Eumundi in the early evening, BOM said.

As much as 40 millimetres of rain was forecast for Brisbane, with warnings of hail as big as 5 centimetres further north between Redcliffe and Woodford.

A separate warning was issued for Wide Bay and Burnett and Southeast Coast Forecast Districts.

Earlier, giant hailstones were reported further west at Toogoolawah, according to BOM.

Rainfall could lead to flash flooding in a number of low-lying areas, the BOM said.