As revealed by InQueensland yesterday, Laurie has delivered a sobering critique of governments, the media, stakeholder groups, parliament, and anti-corruption efforts in the state.

Having held the role for over 18 years, Laurie reflected on Queensland’s dark past and warned that “some of the wider safeguards that existed prior to and immediately after the Fitzgerald inquiry and report have now been fatally weakened”.

He made the comments in a submission to a parliamentary committee reviewing the Crime and Corruption Commission. Due to the lack of other safeguards, Laurie has called for the CCC to be made stronger, more independent and more transparent. 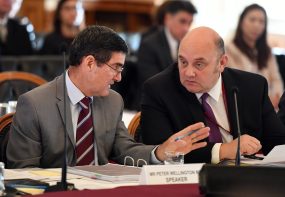 The Parliamentary Crime and Corruption Committee, chaired by a Liberal National Party MP, has now called Laurie to give evidence at a specially-convened hearing on Friday. The hearing will be broadcast, and Laurie will have the opportunity to make his case and respond to any questions.

The committee allowed Laurie to make a late submission – 11 months after it called for contributions, almost all of which were made last term and well before the state election. His submission even came after a March hearing, in which the committee heard evidence from CCC, Queensland Police Service, Queensland Law Society and other stakeholders, all allocated 20-30 minutes, except for the CCC which was afforded an hour on the agenda.

Laurie’s belated contribution to the debate comes amid a backlash against the CCC’s handling of an investigation into Logan City Council, that resulted in charges being dropped, and questions over government accountability and transparency in a pandemic where the normal rules don’t apply.

The Palaszczuk Government has also been the subject of several integrity investigations in recent years, and the CCC has this week asked departments to email staff a survey about corruption issues to gauge workplace sentiment.

The CCC is particularly concerned by lobbying activities, which are regulated by laws, and overseen by an agency, currently under review.