The company is being buffeted by the same economic headwinds that have put a cloud over Brisbane’s last oil refinery, the Ampol operation at Lytton.

While Viva Energy’s Geelong refinery has remained open, maintenance work at the Victorian facility has recently caused odours that have upset local residents. Now, another environmental issue threatens to exacerbate the company’s financial woes and strained relations with the community.

Viva Energy’s Pinkenba facility, or terminal, is used for storage and distribution of fuel, bitumen, oils and greases in Queensland. The site has been used in that way for approximately 65 years, during which time the chemical PFAS was discharged into the environment, an issue that governments, industries and regulators in Australia have sought to address in recent years.

Documents filed in Queensland’s Planning and Environment Court reveal the state Department of Environment and Science issued a clean-up order at the end of March, requiring Viva Energy to address PFAS contamination at the facility over the coming months. The nature of the work is unclear.

While Viva Energy has sought an internal review of the decision, it has gone to court to request a stay, arguing that it is not in the interest of the company or the public that it be forced to comply with the department’s order.

The documents state that Viva Energy is concerned by the tight timeframes for the clean-up, and “the financial ability for the (company) to achieve the requirements, given the impact of the COVID-19 pandemic on resourcing in response to the timelines imposed”.

Critical of the department’s evidence, analysis and order, Viva Energy has told the court there is no immediate environmental concern or risk to human health at Pinkenba. PFAS is no longer being discharged, the company says, and any contamination is historic. 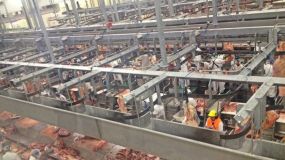 “The extent or frequency of existing levels of PFAS already present in the Brisbane River, which indicate a low level of impact or no impact at all. The Brisbane River already contains levels of PFAS which are pre-existing and as a result of various industrial sources surrounding the river at levels which do not present a risk to human health and the environment.”

However, the department, in a statement, told InQueensland that Viva Energy’s own investigation, requested by the department, found “PFAS is present in ground and surface water being released from both the northern and southern terminals at its Pinkenba site”.

The department wants Viva Energy to clean up contaminated soil in an old fire-fighting training paddock and carry out stormwater management measures to prevent and minimise the release of PFAS to the Brisbane River and Boggy Creek.

Last year, the Federal Government settled a $212 million class action from communities affected by PFAS contamination at Commonwealth sites, largely through the use of firefighting foam at Defence facilities. Inquiries, court cases and investigations continue, and the Queensland department has encouraged petroleum product manufacturers to transition to fluorine-free alternatives.