The Palaszczuk government last month announced the Women’s Safety and Justice Taskforce, led by McMurdo, would be given more time and broader scope to deliver greater change, including new coercive control laws.

It followed nation-wide controversy over the response of the criminal justice system, and institutions ranging from schools to Federal Parliament, to allegations of sexual assault and violence against women.

Attorney-General Shannon Fentiman at the time said the system was “still not supporting women”. She wanted the taskforce to report by October to allow changes in early 2022.

Since then, tragically, there have been more domestic violence deaths, including Kelly Wilkinson and ‘Lordy’ Ramadan on the Gold Coast, prompting an outpouring of public emotion over the prevalence of such crimes and the state of the system.

McMurdo today said there was greater awareness of the problem, more media coverage, improved community education and an increase in complaints, which perhaps amplified any reports of domestic and family violence. She said people were rightly concerned.

“It’s very difficult not to feel that it is a crisis at the moment because we’re all so shocked at the violence and that someone could do this to their own loved ones,” McMurdo said.

“But these things have happened for years.”

After senior police conceded the system had failed Wilkinson, McMurdo noted strong community support for an independent investigation, without offering her own views. The taskforce will continue to examine the role of police in such cases more broadly, including whether there is merit in having all-women units or stations to better support victims.

While some have criticised the October deadline, and the pace of work on coercive control laws, McMurdo said that timeframe was to her “quite fast”. 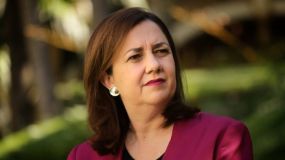 “It’s a huge task to do in the timeframe that we have,” McMurdo said, adding that she felt overwhelmed “just about every day” by the nature of the evidence before the taskforce.

“You could almost have a standing taskforce to do this role.”

Asked about McMurdo’s comments, Fentiman said the government would consider the need for a permanent standing taskforce if recommended. She said Labor had made “significant progress” on the issues but “clearly there is always more to do”.

McMurdo reflected on changes to attitudes and responses since she became a barrister in the 1970s.

“By the time I became a judge in 1991 that had changed … and we’ve come so far since then.We should be proud of what we have achieved so far but we’ve still got a long way to go.”