They shared stories about the pressure of being in the spotlight for so long. It wasn’t a power trip by any means: early in 2020, the Australian Health Protection Principal Committee recommended the number of officials speaking about the crisis be limited, in an effort to keep the messaging consistent.

“Here in Queensland, I know there were lots of other people who wanted to be out there talking about what was happening and I just said ‘you just can’t’,” Young said, knowing even subtle differences in the messaging would confuse the public.

While Young felt that the vast majority of Queenslanders understood and took her advice, there were those who didn’t.

“I did get some pretty nasty death threats, which were a bit awful,” Young said.

A man was charged with making threats to both Young and Premier Annastacia Palaszczuk, who later conceded she had briefly considering stepping away from the top job. Police and government officers rallied behind the pair, and public sentiment has generally remained positive.

Young said it was difficult to comprehend how her decisions could make some people go to extremes, and not think that any issues could be worked through.

“But the amount of support I got was overwhelming and that more than compensated for those little niggles in the back of my mind,” Young said.

Young said Queenslanders had taken her advice with “good grace” – she was shocked how quickly people donned masks during the recent three-day lockdown of greater Brisbane – and had helped the state avoid a much worse scenario.

With vaccines now being rolled out, Young also revealed clinicians had done some research and policy work to determine which patients would be denied treatment in the event of Queensland hospitals being overwhelmed.

Even though Queensland Health was preparing for the worst, as other countries grappled with a lack of ventilators, the idea of leaving people to die made Young uncomfortable.

“I just didn’t want to go there, because my view was let’s get ourselves in a situation that we will never have to make those ethical decisions,” she said.

Young accepted that some clinicians took comfort in the fact the work had already been done, but she feared the community would hear of it and think “If you’re doing that work, that must mean you think it’s going to happen”.

“I just did not want to ever have to get into the ethics of who we denied care to,” Young said.

Young has previously told InQueensland of the support provided by her microbiologist husband, who ensures she comes home to dinner every night. 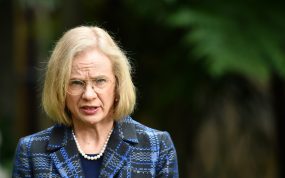 Our virus-buster tells of 2am texts, lost holidays and the man who cooks her dinner

But she said the gesture was due to the fact they both remembered how her previous work dealing with the much smaller swine flu pandemic had taken its toll. While she has previously joked about having told her husband she would never put herself in that position again, there was reason for their concern.

“I just lost so much weight, it was awful,” Young said, adding that they also agreed she should also do 30 minutes of exercise to begin the day.

“I just do it and it has made an enormous difference. I should have taken my own advice years ago.”

Young said her husband, Graeme Nimmo, had played an invaluable role, not only in providing support but helping her work through the issues. He was “beautifully blunt but so wonderful while he does it”.

Sutton, too, paid tribute to his “rock” of a family, who he felt at times were dragged through pandemic within him. He told the podcast of his anger at media representatives who knocked on their front door late at night, answered by his daughter in pyjamas.

“People say you get paid a lot, you’re a public figure, you signed up for this,” Sutton said.

“None of that matters, in any sense whatsoever, when you feel that your family’s wellbeing is threatened.”