The Queensland Productivity Commission has released a paper highlighting the potential “large productivity and growth dividends from improving regulation” but also the glacial pace of reform in Australia.

“There has been a substantial increase in the volume of regulation over time in both Queensland and nationally,” the paper states.

According to the commission, complying with state regulation is costing Queensland business between $3.5 billion and $7 billion each year (or $7,600 to $15,200 per business).

“This is equivalent to around one to two per cent of Queensland’s gross state product,” the paper states.

“These costs are likely to be more than double once Commonwealth regulation is included.”

The commission is concerned that burden is reducing competition as the red tape acts as a barrier to new business entry, and can also be so poorly designed it harms productivity.

“Both competition and business flexibility are vital to achieving the productivity growth and increased economic resilience needed to support sustainable economic growth and higher living standards,” the paper states.

Change may be coming, however, with even the commission affected by recent Labor government reforms: the Queensland Productivity Commissioner is being integrated into Queensland Treasury to establish the Office of Productivity and Red Tape Reduction.

Dick, who took over the budget last year and has the added role of attracting business investment, said he wanted to “unleash” the private sector to drive Queensland’s economic recovery. 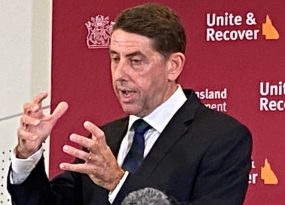 “This will require new and different thinking by government and consistency of action. But the message I want to send to the private sector is ‘you are welcome in Queensland, the government will enable and facilitate what you want to do’.”

The commission noted that regulatory reform had been a focus at both a state and national level for more than a decade, however “this does not appear to have resulted in large improvements in the quality or quantity of regulation”.

It called for a broader approach, with ongoing and targeted reviews of existing regulation and rigorous analysis and assessment of any planned regulations. It also highlighted the ongoing cost of regulation on government and taxpayers – something that, if alleviated, could help stabilise the Treasurer’s budget.