The Destination Brisbane consortium in charge of the massive project has submitted concepts for a large public plaza at the corner of George and Alice Sts, including a structure aimed at honouring the memory of the Bellevue, whose demolition in the dead of night in April 1979 remains one of the darkest episodes in the city’s architectural history.

The plans are outlined in documents quietly lodged with the Palasczcuk Government outlining how the consortium proposes to preserve heritage values within the Queens Wharf site. 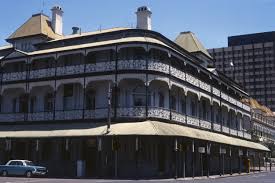 It has proposed building a perforated metal colonnade that would wrap around a planned area of parkland between Alice St and The Mansions terrace houses, tracing the footprint of the Bellevue and evoking its celebrated wrought iron verandahs.

The consortium’s submissions states that the structure would act “as a threshold into the space, providing a sense of intimacy to the lawn whilst also marking the location of the former Hotel boundary alignment”.

“The reinstatement of Bellevue Plaza as a key northeast facing urban and civic space fronting Parliament House, the Botanic Gardens and the new development ensures that this unique space becomes the beating heart of the precinct.”

“People will congregate and sit informally on the sloped plaza and lawn, overlooking a hero fig that, paired with the one in front of the Queensland Club, becomes the gateway to the City Botanic Gardens.”

The proposal has yet to receive approval from Economic Development Queensland, the governing authority over the redevelopment site.

Built in 1886, the Bellevue was Brisbane’s premier hotel and an architectural gem. However, after leaving it to stand abandoned for several years, the Bjelke-Petersen government commissioned the Deen Brothers, whose motto was “All we leave behind are the memories” to demolish the building.

The decision caused public outrage and left a yawning gap in a part of the city previously known for the preservation of elegant historic buildings such as the Queensland Club and Parliament House.

When completed in 2023, the Queens Wharf development will boast a casino integrated with various luxury hotels and apartments, upmarket retail stores, a unique “sky deck” and a pedestrian bridge across the river to South Bank.