The pair spoke on Friday morning and will talk again over the weekend.

“We talked through their remaining issues and agreed our respective teams would work through them immediately,” Frydenberg said.

“I reiterated Australia remains committed to implementing the code.”

The social media giant shows no sign of backing down after banning access to news and information pages across Australia in response to the code. 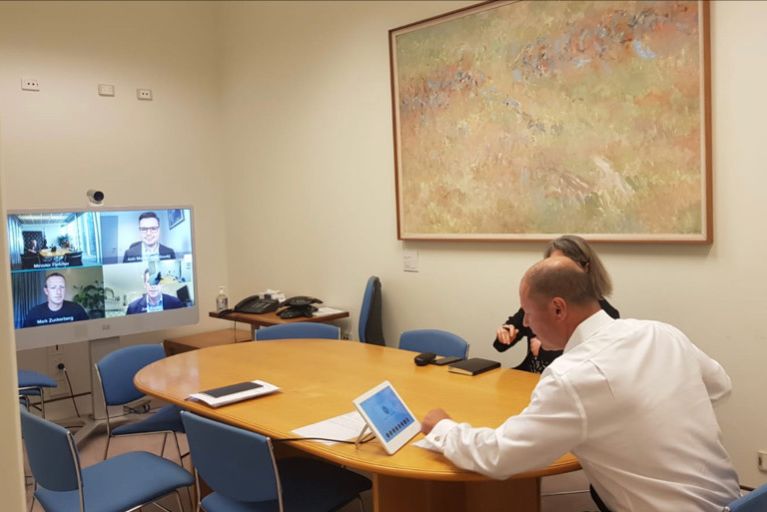 The treasurer said the purpose of the bargaining code extended far beyond paying fairly for journalism.

“There is more at stake here than just one or two commercial deals,” he said.

Frydenberg is calling on other nations to back Australia in its quest to force digital giants to pay for locally produced news published on their platforms.

“Facebook’s behaviour has been reprehensible,” he told the ABC.

Albanese said the company needed to accept media companies should be paid for content to keep journalism alive.

“It’s in Mr Zuckerberg’s interests, and Facebook’s interests, to basically grow up, to accept that governments have a right to determine the regulatory framework in which businesses operate.”

Prime Minister Scott Morrison said Australia would not back down and encouraged Facebook to return to the negotiating table.

“This is Australia – if you want to do business here, you work according to our rules – that is a reasonable proposition,” he told reporters in Sydney.

“But the idea of shutting down the sorts of sites they did yesterday as some sort of threat, I know how Australians react to that, and I thought that was not a good move on their part.”

Morrison said the leaders of India, Canada and the United Kingdom were keenly watching Facebook’s reaction to the media code.

“There is a lot of world interest in what Australia is doing,” he said.

“It is not OK to unfriend Australia because Australia is very friendly. We would like to remain very friendly and it is time for them to friend us again.”

Facebook claimed it had no choice but to shut health and emergency services pages down, arguing the bargaining code was poorly worded.

“However we will reverse any pages that are inadvertently impacted,” the company said in a statement.

Facebook gave no notice of the news ban but it was not unexpected.

The company first threatened to ban news for Australians in August and repeated the ultimatum before a Senate inquiry in January.

The ban restricts Australian users and publishers from viewing or sharing domestic and international news.

Overseas users will be unable to access Australian news.

The media bargaining code is before the Senate after clearing the lower house.

It is likely to clear parliament with bipartisan support, despite Labor criticising the government for its handling of negotiations with digital platforms.