Traditionally linked with the legal profession, and the odd backpacker hotel at its western end, the precinct is now being eyed for a host of new developments — multiple high-end commercial towers, a possible university campus, a stadium, and the train station as a new “Grand Central”.

Brisbane’s CBD has typically been broken into different industry sectors — courts and law in North Quay and Roma Street, business in Eagle Street, health and wellbeing in Spring Hill, and the public sector around Parliament.

But a gradual rethink of how cities work, and how they need to work post-pandemic, has pushed a shift away from sector-by-sector planning and toward mixed-use development, offering residential, commercial, retail and public space all in the same place.

University of Queensland planner-in-residence Stephanie Wyeth, who formerly worked for planning consultants URBIS and is a non-executive director on the South Bank board, said the pandemic had made clear that cities with designated precincts for each industry no longer worked.

“What we’re seeing around the world is cities are starting to rethink their CBDs and what that means, and moving away from that precinct style to mixed-use,” Wyeth said.

Putting an entire industry in one area left that sector vulnerable to collapse during a lockdown, and showed many people preferred to work from home.

North Quay, if planned and managed correctly, could become a well-designed mixed-used part of the CBD, she said.

“So rather than thinking of it as the edge of the CBD, we should be thinking, ‘what is the vision for North Quay? What is its history?’ And really taking that place-making approach.”

Several private developments, all high-end commercial mixed-use towers, may lead the way for the private sector.

Charter Hall recently lodged two development applications — one for a single 20-storey tower concept, the other for a twin tower concept of 30 and 21 storeys each — at 309 North Quay.

Charter Hall’s proposal, developed by URBIS and designed by Blight Rayner, is designed to house bars, restaurants and cafes on the ground floor, and swathes of public space.

A few hundred metres down the road, another two-tower development submitted by the Maple Group, one 30 and the other 35-storeys, at 57 Coronation Drive was approved in January.

The towers will incorporate the heritage-listed Davidson Residence on the site, and will hold 168 serviced apartments, office space and retail.

Cbus Property chief executive Adrian Pozzo said in July last year that the tower would be a catalyst for the North Quarter precinct development, and would include a childcare centre, a lap pool and end of trip facilities, and food and beverage outlets.

“There aren’t really many precincts or parts of the CBD that have such an amount of opportunity, because others are constrained by the river or heritage considerations or ownership challenges.”

Tuma also noted the shift from “monoculture” development to a multi-use site meant there was a “really transformational opportunity” if used carefully. 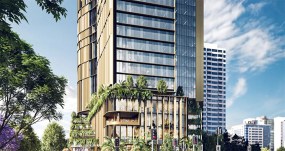 Last year, the State Government declared a Roma Street Priority Development Area covering the underground rail’s planning envelope, and also announced a plan for a build-to-rent affordable housing plan at the site of the former Children’s Court at 50 Quay Street.

City planning committee chairwoman Krista Adams said the council was supportive of the area’s change into a mixed-use business and public space.

A Cross River Rail spokesman said, despite COVID-19 uncertainty, there had been strong private-sector interest in development around the CRR site, with more than 60 industry meetings held to discuss proposals for the site.

Excavation for the Roma Street Station has begun, while above-ground the station could also be home to a new Griffith University inner-city campus.

The university eyeing the site for a new campus for business, law, information technology and its college.

“Griffith is continuing to engage with the Queensland Government in co-investment opportunities, which are critical for the project to proceed,” the university said in a statement.

Brisbane Live, a possible 18,000-seat stadium, could also sit next to the Cross River Rail station, between Roma Street Parkland and the city.