Robert Weber was initially reported missing after his empty Ford Falcon was found bogged on a road near Kilkivan, west of Gympie, on January 15. He was found on Sunday morning by local MP Tony Perrett, sitting under a tree on Perrett’s farm.

The 58-year-old had last been seen leaving the Kilkivan Hotel with his dog on January 6 and police mounted a search of the area.

The search continued for days with police and State Emergency Service personnel scouring bushland, rivers and dams for any sign of Weber.

As time passed hopes of finding him alive faded and officers finally decided to call off the search on Thursday.

Police say he had initially got bogged and stayed with his car for three days in the hope that another car would pass by before his water ran out.

Weber set off on foot but got lost and decided to stay near a dam where he could get water until help arrived.

He had survived by eating wild mushrooms, drinking the dam water and sleeping on the ground out in the open. 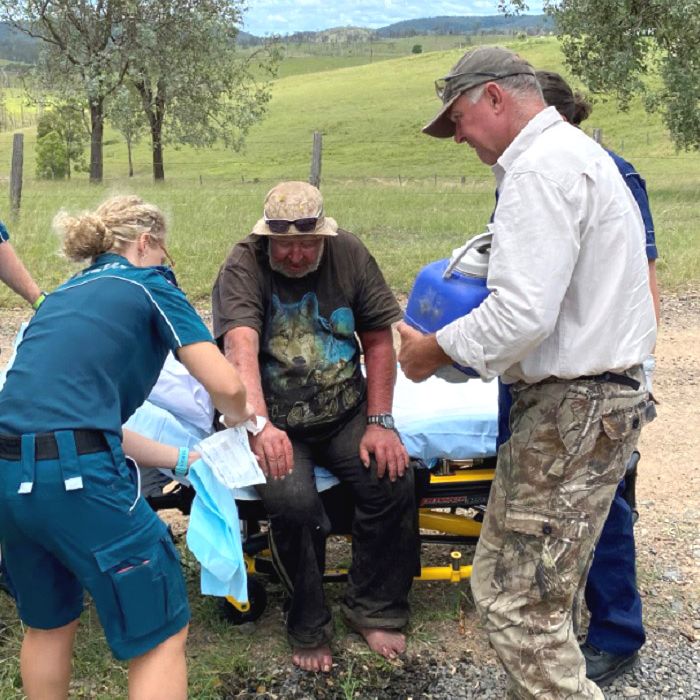 Perrett said he and his wife Michelle found Weber at 9:00am yesterday, about 3km from where workmen mustering cattle found his car a week ago.

“He was sitting under a tree near a dam waving at us,” Perrett said.

“We’d been past this dam on numerous occasions over the last week and when we saw him there it was just quite extraordinary.

“He certainly saw the helicopter that was there last week so he knew there were people out there searching for him.

“Just this morning it was good fortune that he was there and we were able to locate him.

“He said he was trying to get to Caboolture and he got disorientated … he became lost and didn’t know where he was.”

Weber told his rescuers he had been eating wild mushrooms and drinking water from a nearby dam.

“There were mushrooms in the water courses, the creeks, and he was able to be able to pick them and eat them,” Perrett said.

The Member for Gympie called an ambulance and the Kilkivan police to report Weber was OK.

Authorities were then able to pass on the good news to Weber’s family.

“So we transported him a number of kilometres back to where the house on the property was and just waited for the ambulance and police to arrive,” Perrett said.

Police said Weber was taken to hospital suffering from exposure to the elements, but he was otherwise safe and well.

Perrett said he had been determined to keep checking water points.

“We were just very, very lucky this morning that we did locate him,” he said.