The main engine generated nine tonnes of force and passed efficiency, thrust, and performance targets. “You could load about four SUVs onto a platform with one of these engines underneath it and it would hover,” chief executive Adam Gilmour said.

The question is where will the completed rocket be launched?

The State Government last year announced Bowen in North Queensland as its preferred location for a potential space hub.

An $8 million feasibility and technical study of the potential to develop a launch site next to the Abbot Point Coal Terminal was announced in July with the hope the centre could be operational by 2022.

“It is moving through Government but we’d really like it to accelerate,” Gilmore said.

“We very much would love to launch from Bowen. “It’d be a real shame if the rocket was made in Queensland but wasn’t launched in Queensland.”

Gilmour said the rocket would have to launch from South Australia if the Bowen proposal did not come to fruition. 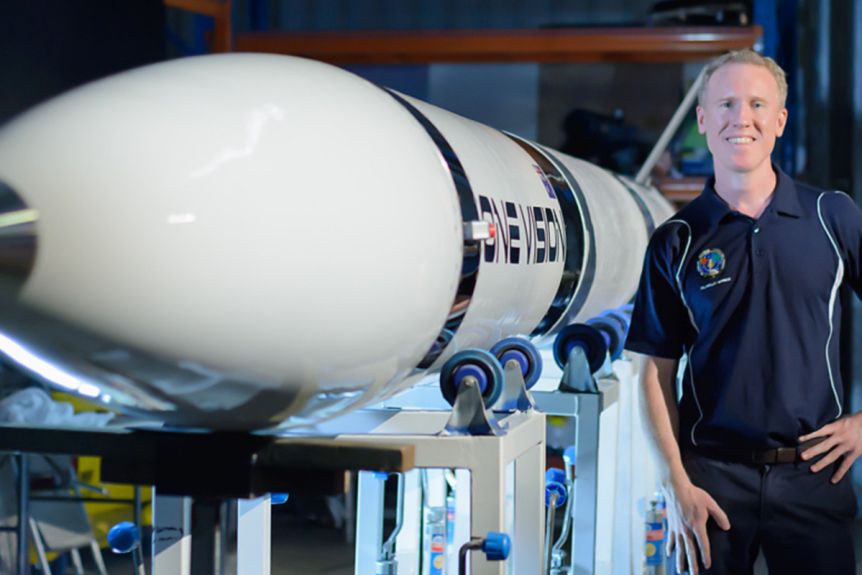 Adam Gilmour and his team hope to have rockets up in space by 2022. (Photo: Supplied: Gilmour Space Technologies)

While the ultimate goal is to one day launch people into space, the rocket will initially take satellites for a range of purposes.

“You can detect bushfires from space, monitor water levels, measure temperatures [and] the quality or health of plants in farms, from space,” Gilmour said. “For the next six months we’re going to be testing pretty much every component … and we start construction of the launch vehicle in April.”

“You can imagine the town being very full with a lot of excited people coming to Bowen to watch a rocket launch which they’ll be able to see from the hills around Bowen,” he said.

“I don’t see any show-stoppers.

“We’ve got all levels of government supporting it, on both sides of politics.”

A spokesperson for the Department of State Development, Infrastructure, Local Government and Planning said a due diligence study was underway.

“The investigation is analysing operational capability, environmental and land use considerations, and technical suitability,” a statement read.