Several big spenders have made fresh disclosures with the Electoral Commission of Queensland ahead of the major parties reconciling their expenses for the October state election.

Some lobby groups and companies spent hundreds of thousands of dollars trying to influence the outcome of the election, which resulted in Labor being returned with more MPs for a third term (the first fixed four year term in Queensland).

Separately, businessman and former federal MP Clive Palmer has filed new documents in his Supreme Court defence against an ECQ charge that he is a developer and therefore a prohibited donor. If he loses the case, Palmer, as head of the United Australia Party, could see some of his company donations diverted to the State Government. 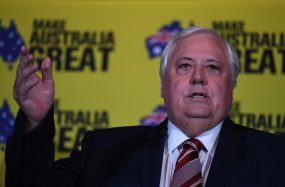 After his humiliating election fail, will Palmer ask for his money back?

The documents, sworn and filed by his lawyers, ask the Supreme Court to accept “that members of the Australian Labor Party and the Queensland Labor Government have called on the (ECQ) to investigate donations to the Clive Palmer’s United Australia Party and spending on electoral campaigns by entities associated with Clive Palmer … and it should be inferred that the (ECQ) has been subjected to political pressure to commence the originating application”.

Palmer and his companies directed almost $5 million into UAP, and ran sensationalist ads across Queensland, but failed to have a single candidate elected. The government has denied the existence of a conspiracy.

The latest Palmer court case continues as new disclosures give further insight into the amount of money spent on election campaigns – and not just by political parties.

In the expenditure returns filed to date, mining company New Hope spent the most, $658,528.31, but there is a new second biggest spender on the list: Master Builders Queensland spent $440,721.05 on a campaign in which it gave the losing Liberal National Party more ticks than Labor.

The Resources Council of Queensland spent $388,972.91 after running an anti-Greens campaign that split its membership. The Greens ultimately gained a second seat in parliament.

The Shooters Union spent $203,367 on the campaign, the Green Shirts Movement appears to have spent $34,093, while the Local Government Association of Queensland spent $59,739.

Meanwhile, former Labor government minister Margaret Keech, who ran as an independent on the Gold Coast, has disclosed the $43,974 cost of her unsuccessful attempt to return to parliament.