A severe weather system hit the region on Monday night, dumping up to 190mm of rain in just an hour on some of Brisbane’s southern and bayside suburbs and the northern Gold Coast.

The resulting flash flooding led to six swiftwater rescues and 170 calls for assistance.

Queensland Fire and Emergency Services Commissioner Greg Leach says it’s disappointing that some drivers had to be rescued after they disregarded advice and tried to drive through floodwaters.

“When you’re driving through floodwaters not only do you put your own life at risk, you also put at risk the lives of the swiftwater rescue firefighters, who have to come and rescue you,” he told reporters.

“So please, if it’s flooded, forget it. Back it up and find an alternate route.”

The rain and flooding was the heaviest in Brisbane, particularly Alexandra Hills, Sheldon and Thornlands.

The floodwaters washed away fences and animals in the semi-rural suburb of Sheldon and a car was even swept away and dropped on a road guardrail in Thornlands.

The rains also washed out the penultimate day of the fifth and final Test between Australia and India at the Gabba.

Commissioner Leach said the 170 calls for help were mainly about leaking roofs, fallen trees and sandbagging.

As residents and businesses mop up on Tuesday, more severe thunderstorms are possible in the evening. Four systems are looming over the southeast.

Bureau of Meteorology forecaster David Grant said that any rain would not be as widespread as Monday’s deluge.

“Severe thunderstorms are still going to be a risk around the southeast today with heavy rainfall likely damaging winds and large hail possible,” he said.

“But on the bright side, it’s going to be more isolated kind of activity, compared to the widespread activity we had around the southeast last night.”

“The trough sitting inland is still likely to persist there, so the triggers will likely have those storms firing once again, unfortunately,” he said.

“At this stage, a slightly lower risk in terms of severity, but there will certainly still be the risk of seeing those potentially severe thunderstorms, both bringing heavy rainfall, damaging wind gusts and potentially some large hail as well.”

He said there were four storm cells looming over the southeast coast.

“Alexandra Hills has had 191mm since 9:00am yesterday and 140 of that fell in two hours so quite intense rainfall there for a couple of hours,” he said.

Between 6:00pm and 7:00pm, 118mm fell at Alexandra Hills in Redland City, while 105mm was recorded just south of Beenleigh in Logan. 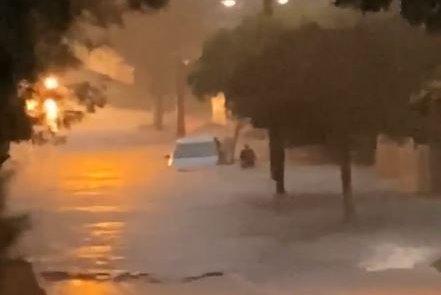 A severe thunderstorm warning was cancelled just after 10:00pm.

It was in place for people on the Sunshine Coast and parts of Gympie, Somerset, Redland City, Noosa, Brisbane City and Moreton Bay areas.

Residents on the Sunshine Coast are cleaning up this morning after a short but severe storm tore through some suburbs, bringing trees down on to homes and leaving hundreds without power. 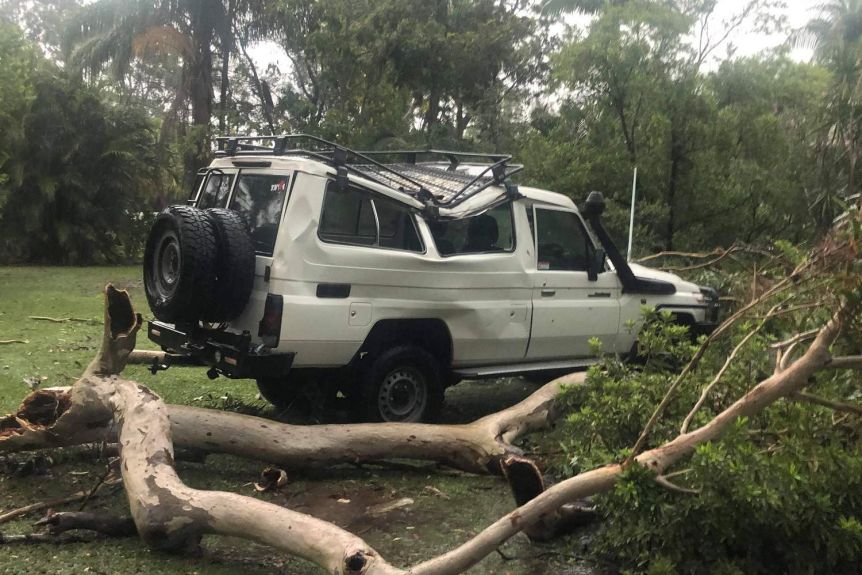 A car was severely damaged by a falling tree at Little Mountain on Queensland’s Sunshine Coast. (Photo: Supplied: Jaidyn Mees)

A quick burst of heavy rain and strong winds caused dozens of trees to be uprooted in Little Mountain, with gusts of up to 57km/h recorded at the Sunshine Coast airport.

The State Emergency Service said they received 58 calls for help overnight, mostly in response to the wild weather in this area.

At the peak of the storm, more than 350 homes and businesses were without power, with dozens still disconnected on Sunday morning as crews worked to restore the system.