The six people infected with the same UK strain are all connected to the Hotel Grand Chancellor in Brisbane, which was this week shut down as a quarantine facility. Some 500 people were initially deemed at risk of infection as authorities sought to determine whether it had spread from person to person or through air conditioning.

Of the 147 people who were in quarantine after the first case at Hotel Grand Chancellor, but have since left, only the Queenslanders are known to have tested negative. Other states have not reported any new UK strain cases.

When the cluster was confirmed, 129 quarantined guests at the Hotel Grand Chancellor were transferred to The Westin in the CBD as a precaution and have also tested negative. All 226 staff have been contacted and their test results have so far been negative too.

The alarm was raised on Wednesday after health authorities discovered the virus linked a man who arrived from the UK on December 30, his partner, a cleaner and her partner, and two people who subsequently arrived from Lebanon. Their infections were traced back to the seventh floor of the Hotel Grand Chancellor.

Police Commissioner Katerina Carroll today said environmental swabs were being taken at the Hotel Grand Chancellor, and there would be various assessments and inquiries undertaken to determine how the virus breached quarantine.

However, the investigation has been hampered by the CCTV network at the Hotel Grand Chancellor not having a camera on the seventh floor. She said staff had nonetheless been helpful.

Carroll has ordered an audit of hotels used in quarantine to ensure there are recordings to complement the physical patrols by police. Police have already moved to install more cameras, including in The Westin.

“The last variant I think really has changed the game,” Carroll said, referring to the UK strain.

“I want to really up the ante here to make sure that we have every aspect of floors covered into the future.”

Australia has again restricted the in-flow of people returning from overseas, and Queensland has introduced extra precautions in recent weeks, including the routine staff testing that picked up the case of the cleaner. Carroll noted that 40,660 international travellers had been processed in Queensland since the pandemic began and 32,218 of those moved through quarantine.

The latest security crackdown came as Premier Annastacia Palaszczuk sought to downplay the prospect of mining camps being used for quarantine, an idea she herself floated yesterday as the extent of the Grand Chancellor drama became known.

In her daily media conference today, Palaszczuk pre-empted questions on the issue by saying it was just one proposal that would require “a lot of work” and further discussion at National Cabinet next week. 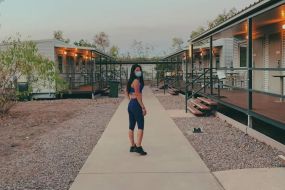 “Please give me the opportunity to speak to my federal counterparts,” Palaszczuk said, later declining to nominate sites, processes or the likelihood of Queensland implementing the proposal.

Queensland recorded three new cases of COVID-19 overnight. Two were in travellers returning from overseas and already in hotel quarantine, while the third was a man in Cairns who returned from the Congo in September, tested negative in hotel quarantine, but has since been found to have had the virus.

Chief Health Officer Jeannette Young said the man tested positive before returning to work but it was thought to be due to viral shedding, which may also explain why sewage testing in his area had detected traces of COVID-19. She said there was no current risk to the community.

Queensland will have restrictions for at least another week, while NSW is set to ease restrictions imposed in the wake of the Northern Beaches cluster.