More than a dozen firefighting crews are battling the huge blaze, at an industrial site adjacent to Brisbane’s port.

The fire started about 2.30pm on Wednesday at a recycling plant on Gosport Street, Hemmant.

“There is lots of smoke coming out and signs of structural collapse,” a Queensland Fire and Emergency Services spokeswoman said.

A large plume of black smoke billowing from the fire can be seen from more than 15 kilometres away.

“There’s several large commercial structures engulfed with fire and it’s causing quite a lot of smoke by-products and ash falling in the area … there is quite a lot of pollution in the air,” paramedic Paige Harris said.

Police have cordoned off surrounding streets and traffic diversions are in place.

A smoke warning has been issued and nearby residents are encouraged to close their windows and remain indoors.

“Firefighters are working to contain the blaze and smoke is affecting the area,” QFES said in a statement.

The building is understood to be a cardboard and paper warehouse. 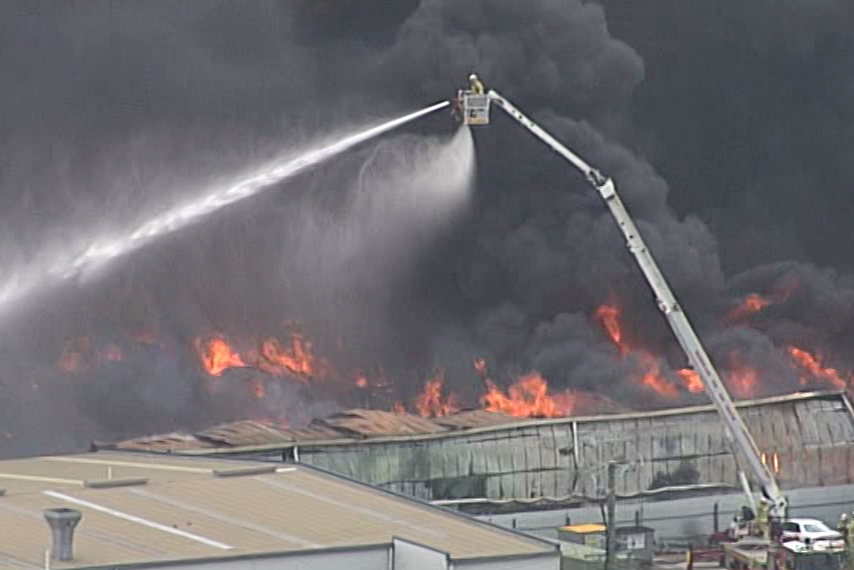 Fire crews are using cranes to fight the flames but the building is well alight.

“If affected, residents are asked to close windows and doors. Those suffering from a respiratory condition should keep their medications close by,” QFES said.

Mark Lucas works at South East Queensland Hauliers about five doors down from the recycling warehouse.

He said workers noticed smoke on the property around 2:30pm and went to see where it was coming from.

Police soon arrived and closed both ends of Gosport Street, blocking entry to trucks that regularly come and go from the property to transport containers to the Port of Brisbane.

“There’s ash particles dropping down [but] there’s nothing dangerous about where we are and everything’s safe on our site,” he said.

There have been reports of ash from the fire coming to ground as far away as West End.