Manta rays, which can grow to more than 8-metres wide, are usually only seen in large numbers in the cooler months, but this spring they have shown no signs of moving on and are causing quite the stir among island visitors.

Lady Elliot Island marine biologist Jacinta Shackleton said tourists and researchers were not the only ones enjoying the mantas’ prolonged stay, with dozens of the graceful sea giants basking in pampering sessions as they cruised around the reef.

“It’s where we have the largest aggregation of the mantas on the east coast,” Shackleton said. “Fish will do a very important job of picking off parasites and dead skin so it’s kind of like a big day spa for the mantas. They love it!

“The biggest aggregation I’ve heard of was more than 100 but that was quite a few years ago.”

However, the unique pink manta ray nicknamed Inspector Clouseau, which rose to fame when photos of it went viral earlier this year, is proving elusive. 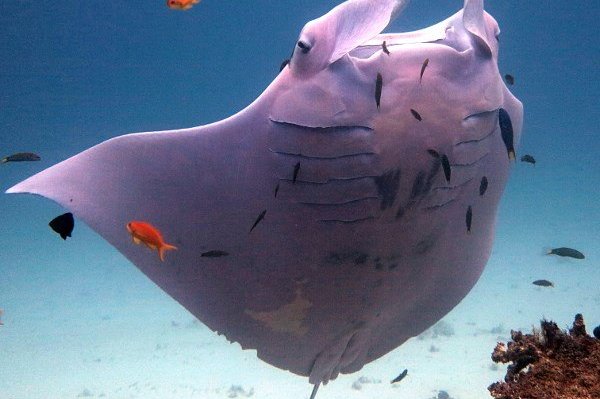 Shackleton said visitors and staff were keenly awaiting his next visit.

“You’ve got a really good chance of seeing him if your are diving,” Shackleton said. “We are just hanging out hoping he will make an appearance.”

“One of the main reasons is due to our proximity to the continental shelf. That means there is a lot of plankton and nutrient-rich water,” Shackleton said. “Sometimes we will have random days through summer that we will have quite a few there.

“Normally during summer and the warmer months when the water heats up we might see a handful each day.”