He had dozens of skin cancers on his scalp, head, face and neck and was told by management at the hospital that employed him they did not like his look.

He lasted just two hours in the job before being escorted off the premises.

“I was gutted. I really can’t describe it. I was ashamed — I had always been paranoid about my skin,” Gibbs said.

“I had horrible thoughts in my head going home and I was totally embarrassed, it was a dark day.”

The 55-year-old became paranoid about going out because he felt “people stare all the time”.

Socially isolated and depressed, his doctor recommended a new form of radiotherapy that uses a medical linear accelerator, which is designed to treat “internal” cancers, rather than skin cancers.

The innovative treatment, known as Volumetric Modulated Arc Therapy (VMAT), delivers wide-field radiation that shoots from all angles as the machine rotates around the patient.

The treatment is designed to target tumours with radiation beams, while avoiding organs they do not want to treat surrounding the tumour.

For Gibbs, who has endured having more than 100 other skin cancers surgically removed, the treatment has been life-changing. 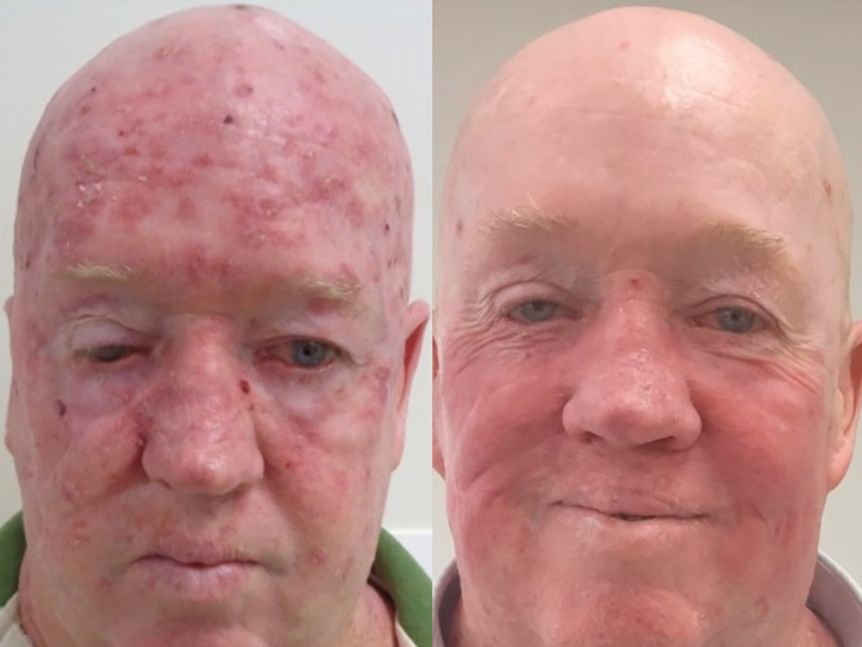 Brett Gibbs underwent a major transformation from the first to the last day of his treatment.(Supplied)

His face is clear, his skin is supple and he has not had any recurring cancers since he underwent the therapy.

“As treatment progressed, I noticed people were not staring at me any more,” he said.

“As my face got better, my confidence returned and I started to go out. “I felt like I was getting my life back thanks to the therapy and I am no longer afraid of a camera. I feel like a new person.”

“It was the first widespread use of wide-field radiotherapy for severe solar-damaged skin,”  Sinclair said.

“We’ve now done more than 4,000 patients around the country. The results have been, not to understate it, quite spectacular and far better than we anticipated.

“These areas are totally cancer-free, which is the remarkable thing.”

The treatment also relies on a much lower dose of ionizing radiation, which Sinclair said had fewer side effects.

“It was a good treatment option for Brett because really he has tried both surgery and topical treatments and failed,” Sinclair said.

“We got a far more powerful response than we ever anticipated”, he said.

“We think that by treating a wide field, you are releasing a lot of tumour antigen and the body’s immune system is reacting against it.

“So we feel that the accuracy of the technology is triggering a response against what is called the oncogenic load or all the different types of tumour cells that are brewing in that tissue.

“This will be a rich area for research as we go forward.”

Every year, an estimated 350,000 Queenslanders are diagnosed with non-melanoma skin cancer, according to Cancer Council data.

Across Australia, nearly 1 million people were treated for the same cancer.

In severe cases, it can leave some people with deformities after numerous tumours have been cut out.

Sinclair said some patients have had to have a cancerous ear removed or the side of a cheek, because until now surgery was the only option.

“This is a game changer, it is going to cure these patients — we believe permanently — and the data is all showing that,” Sinclair said.

“Surgery has always been the mainstay of treatment of skin cancers,” Burke said.

“But for many of these high-load tumour patients, they have wide areas of cancerous change, whether it’s pre-invasive cancer, or actual cancer.

“Surgery can’t cope with that because obviously there’s a cosmetic detriment if you’re excising or cutting out large areas of tissue.

“So the value of radiation treatment is that we can treat large areas of cancer and pre-cancer and keep good cosmetic outcomes, despite treating a significant volume of disease.”

This meant the patient “doesn’t end up with cancer later down the track” “It is extraordinarily life-changing for them,” Dr Burke said.

Gibbs has never been happier. He now has mirrors in his home and has finally had some wedding photos taken with his wife Genevieve and family.

He refused to have any photos taken on their wedding day in 2013 because he hated how he looked.

Ms Gibbs said her husband was a “totally different person”.

“He was always aware people were staring at him,” she said.

“But now he is the one walking down the street saying, ‘hi’.”