Evans’s publisher Pan Macmillan said it was “finalising its contractual relationship” with him while bookshop chain Dymocks said it would also stop selling his books.

The backlash came after Evans posted a cartoon which depicted a “black sun” symbol, used by far right groups including white supremacists in the US and paramilitary units in Ukraine.

In the cartoon, a caterpillar wearing a MAGA hat, popularised by US President Donald Trump, says “you’ve changed” to a butterfly with the “black sun” symbol on its wing.

The butterfly replies: “We’re supposed to.”

The black sun, or sonnenrad, was also used on the rucksack and manifesto of the shooter who murdered 51 people in the 2019 Christchurch mosque attacks.

“I look forward to studying all of the symbols that have ever existed and research them thoroughly before posting,” he said in a statement. 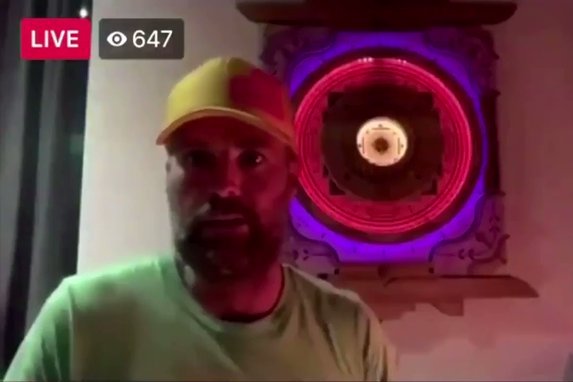 Pete Evans was fined $25,000 by the Therapeutic Goods Administration over claims he made about a BioCharger. (Photo: Supplied: Twitter)

Today, Woolworths Group said it would be removing Evans’s books such as Going Paleo from its Big W stores.

“Big W reviews its range of books regularly to ensure they’re aligned with its values,” Woolworths Group said in a statement.

“It has decided to remove Pete Evans’ book titles from the Big W range.”

Pan Macmillan said any bookshops which wanted to return the titles should contact them.

“Those views are not our views as a company, or the views of our staff,” the company said.

“Pan Macmillan is currently finalising its contractual relationship with Pete Evans and as such will not be entering any further publishing agreements moving forward.”

Woolworths Group said its Woolworths supermarkets had no direct commercial relationships with Evans.

Cookware brand Baccarat and homeware brand House also moved to cut their ties with him.

“In our view, the images and views expressed by Mr Evans are abhorrent, unacceptable and deeply offensive,” both companies said.

Raw C, a health food company that Evans was formerly associated with, said it took steps to “disassociate with him both personally and as a brand” over the past year due to a “pattern of behaviour by Mr Evans”.

“We are both horrified and saddened by the religious and anti-Semitic undertones by [sic] this tweet,” the company said on its website.

In April, Evans was fined $25,000 by the Therapeutic Goods Administration for claims he made about a product called a “BioCharger” and the “Wuhan Coronavirus”.