As the storms swept through, more than 80,000 lightning strikes were recorded by Energex and 18 powerlines were torn down.

Bureau of Meteorology senior meteorologist Felim Hanniffy said the system was lingering today and may bring another wave of wild weather.

“It’s very coastal at the moment but it could bring a chance of some shower and storm activity as it clears off,” he said.

“There’s still instability around late morning and early afternoon so it’s worth keeping an eye on.” 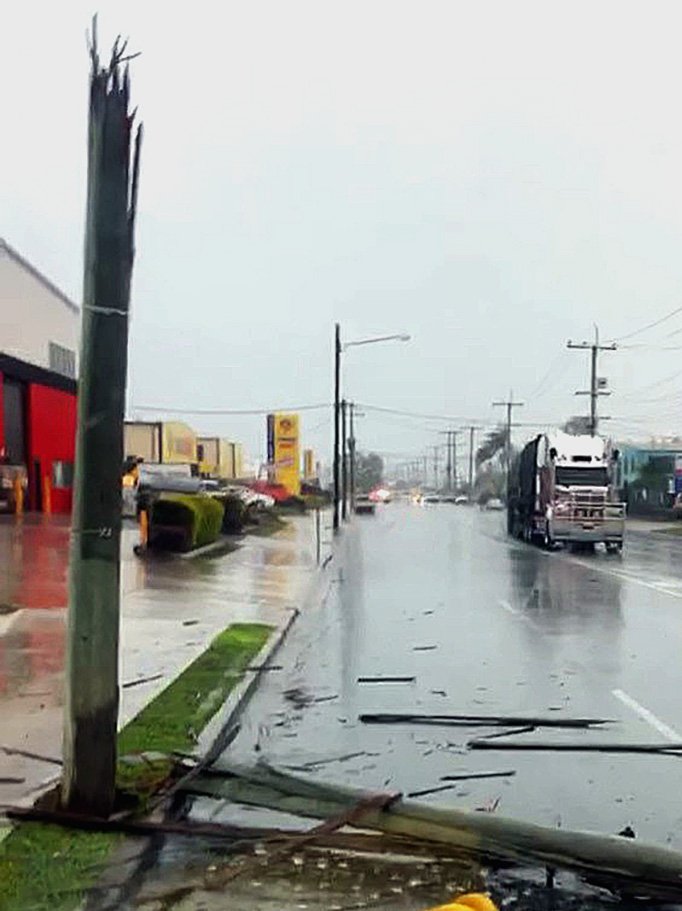 A power pole destroyed after being hit by lightning on Leitchs Road at Brendale, north of Brisbane.(Supplied: Energex)

In the past 24 hours, some of the heaviest rainfall was recorded inland of Noosa — about 80mm — and parts of the Wide Bay and Southern Downs received up to 100mm throughout the deluge.

Downpours totalling about 150mm in Brisbane over the past four days have resulted in the capital exceeding its October average.

Meteorologist Pieter Claassen said the recently declared La Niña was providing the moisture for thunderstorms to feed off.

Claassen said clearer and warmer weather was on the horizon but warned Queenslanders to be aware of other weather risks heading into the weekend.

“By Friday pretty much all of the weather throughout the entire state should have cleared off and look like we’re heading to sunny days,” he said.

“Even some severe fire dangers forecast for southern districts as well — so really quite a big turnaround.”

Gympie District Beef Association president Mick Seeney said it was a relief just to see some green again after the heavy downpours.

Parts of the Wide Bay and Southern Downs received up to 100mm throughout the deluge.

“Before that it was just desolate you know, the grass was really short, the cattle were really hungry and you know the farmers were just losing the confidence that it was going to rain again,” he said.

Seeney said it was a welcome start but more rain was needed.

“This only provides grasses, but no run-off and in most places there’s very little surface water left,” he said.