Queensland’s Bureau of Meteorology (BOM) has issued a severe thunderstorm warning for the region, predicting flash flooding for some areas.

Very dangerous thunderstorms were also forecast for Caboolture, and areas around Caloundra, Peachester, Landsborough, and Maleny this afternoon before moving on to Maroochydore and Caloundra. 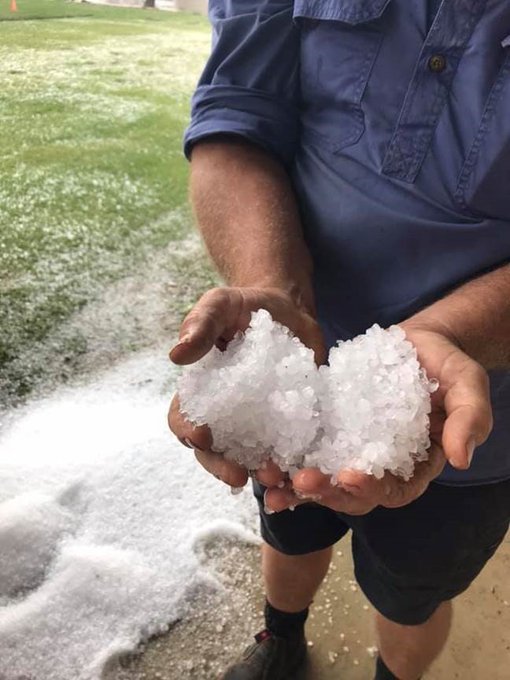 Hail has fallen in Gayndah and Biddeston. Kate Cooke took this pic from her back yard. (Photo: 7 News)

Other severe storms were expected to hit Beaudesert and surrounding areas as well as Gayndah, Mount Tamborine, Tamborine, Tin Can Bay, Rainbow Beach and Inskip.

Hail has already fallen at Biddeston near Toowoomba, Stanthorpe and west of Gympie at Crownthorpe.

The BOM said it expects a “carbon copy” of yesterday’s wild weather.

Tuesday’s storms brought 72mm of rain across Brisbane, with flash flooding reported in several areas during the city’s wettest October day for a decade.

“It’s very much a carbon copy of what we saw yesterday, with showers and thunderstorms to pop up through the mid-morning and then start to roll off towards the east coast as we get through the afternoon,” Markworth said.

“We are expecting super cells further out west, potentially making it over towards the coast.

“[So] we should expect a very similar situation to yesterday where we saw a bit of squall line move across with the heavy rainfall that fell across Brisbane city and suburbs.”