Labor and the Liberal National Party are vying for key seats in north Queensland, and playing to their supposed strengths of, respectively, job-creating infrastructure and law and order. But funding, policy specifics, and unity have again been called into question.

In Townsville for a “beautiful, beautiful north Queensland day,” Frecklington said the nights were the worst due to family disfunction, crime and general disorder.

Continuing the law and order campaign that has been a conservative mainstay in the north, Frecklington said an LNP government would trial a youth curfew in Townsville and Cairns, giving police the power to take kids to “refuges” and fine their parents.

The curfew would be 8pm for youths under 14, and 10pm for older kids aged under 18, with police having some discretion to determine who should be detained.

Frecklington said parents without a reasonable excuse for their kids being out at night would be fined $250, with police again allowed some discretion. The Government would need to work out issues around refuge capacity, and Frecklington struggled to explain how the measures would address family dysfunction.

While the LNP announced a similar policy in 2017, Frecklington said the latest position was in response to a crime wave under Labor and informed by the community and police, including six officers running as LNP candidates.

“I will not apologise for being tough on crime, I’ve been to this community too many times, I’ve met with too many people who are hurting,” Frecklington said, noting it was her 29th visit to Townsville since becoming Opposition Leader.

“The police in Townsville know who these youths are, they know the youths are laughing in the face of police officers.”

But Frecklington referred to overall crime rates, not youth-specific crime rates, with the number of youth offenders in Queensland at a 10-year low. Queensland police also conducted a crime blitz in Townsville shortly before the campaign, although Frecklington was quick to criticise Labor’s “catch and release” approach.

Both parties have this year announced law and order packages relating to youth crime.

Palaszczuk today accused Frecklington of announcing an unfinished policy and failing to match Labor’s promise of a record number of new police officers.

“She didn’t come to north Queensland with a plan for jobs, that’s the number one issue here,” Palaszczuk said, even though Frecklington said the LNP also hoped to deliver more jobs.

Palaszczuk could herself be accused of announcing an unfinished policy, with much-vaunted plans for a ‘second Bruce Highway’ largely based on existing state funding that has been set aside and requiring a significant commitment from the federal government over the long-term.

That is despite Labor repeatedly criticising the LNP’s long-term plan to upgrade the Bruce Highway, and factoring it into claims of $26.3 billion in unfunded election commitments.

“We have said very clearly … that we are borrowing $4 billion to keep Queenslanders in work and get more people into work,” Palaszczuk said.

The $4 billion has almost been fully allocated, and Treasurer Cameron Dick said he would release Labor’s policy costings shortly and likely ahead of the LNP. He said the failure to match Labor’s promise of extra police amounted to another LNP cut, and with more people unemployed there would be more crime. 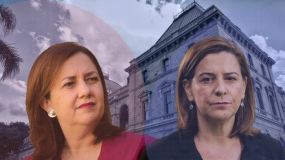 Youth crime numbers are down, but the subject is bound to come up

A day after promising to “read the riot act” to Labor candidates calling on voters to put the LNP last, and not One Nation as she had instructed, Palaszczuk insisted the party had made her views clear.

But several Labor candidates who joined Palaszczuk at her announcement were not as emphatic, leading the Premier to be questioned about her apparent loss of authority. This came as Labor continued to warn of “chaos” if the LNP had to form government with right-wing minor parties.