In a 2016 Facebook post, Glenn Doyle published a photo of himself with Pauline Hanson and the words “Breakfast with the next prime minister!”

The post was raised by journalists during a campaign event on Wednesday, with the current Prime Minister, Scott Morrison, and LNP leader Deb Frecklington in attendance. Doyle dismissed his post as a joke, saying he had only met briefly with the One Nation leader, and again pledged his loyalty to the LNP.

Today, Deputy Premier Steven Miles referred to a 2018 post from Doyle in which he linked an ABC post referring to a 1961 debate about married women and education with the words: “A lot of good points raised on both sides here – I’m afraid I’ll have to sit on the fence. More research needed!”

Miles alleged the post was evidence that Doyle did not believe women, particularly married women, were entitled to an education. But Doyle, a Townsville police officer, insisted that did not reflect his views.

“I’ve got a wife who’s got degrees, I’ve supported her,” Doyle reportedly said when challenged by journalists.

“A lot of the women who I socialise with are very well-educated. I support women, I 100 per cent support our leader, I always have.”

Frecklington, while suggesting there was no place for sexism in politics, echoed Morrison’s previous criticism of Miles and said he should grow up.

Mundingburra is in contention at the election, with Labor MP Coralee O’Rourke not recontesting and seven candidates vying to take her place. Preferences may prove crucial.

This afternoon, Doyle apologised, saying he had “posted material on social media, often as a joke, that I regret”.

“It’s disappointing that Labor wants to make this election about old social media posts instead of about which party has the best policies to grow the economy and create jobs,” Doyle said in a statement distributed by the LNP.

Old social media posts have also made the news in other close seats, including South Brisbane, held by former deputy premier Jackie Trad, who has accused her Greens rivals of sexist sledging.

Political parties have always had ‘dirt units’ looking for unsavoury information on their rivals, and social media has only provided further evidence of people’s past acts and statements. But just as it can be used to tarnish an opponent, social media can also be used to promote your own record.

Queensland University of Technology researchers analysed the parties’ use of Twitter during the start of the campaign and found Labor to have been dominant.

Palaszczuk's social strategy: Money for nothing and your clicks for free 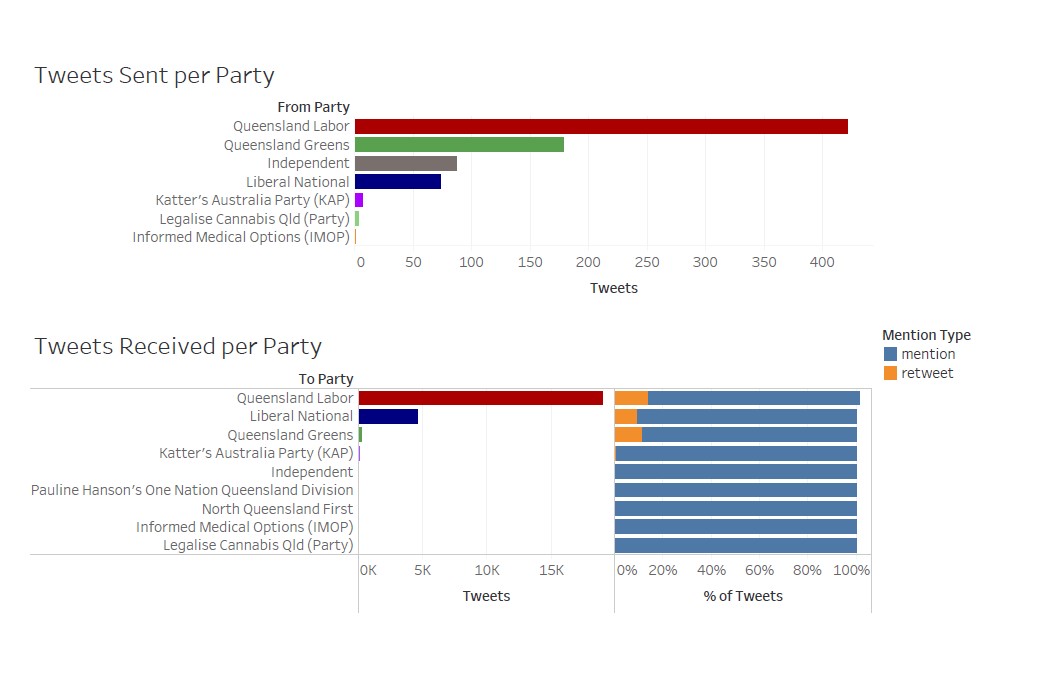 While the major parties used Twitter to promote their policies, Labor did it more often, and also took the opportunity to criticise the LNP more than the Opposition criticised the Government at that point.

“Looking more widely at the issues and topics raised on Twitter throughout the entire week, we found Labor were strongly challenged around what some see as an each-way bet on the coal and fossil fuel industry,” said Associate Professor Dan Angus.

“Other topics that generated significant discussion included the ongoing NSW/Queensland border restrictions, while the ghost of former LNP Premier Campbell Newman made an appearance in the context of warnings of cuts to frontline public service staff by Deb Frecklington, with a particular emphasis on health workers.

“There was also discussion centred around key policy announcements such as investments in construction projects by Labor and the LNP, and in Bruce Highway upgrades by the LNP.”

QUT found no evidence that “bots” were being used in an attempt to influence the election outcome. Only one such Twitter account was detected.