Basal Cell Carcinoma (BCC) accounts for 70 per cent of non-melanoma skin cancers in Australia and is generally caused by exposure to ultraviolet radiation from the sun.

While most are not life-threatening, cutting them out can leave people disfigured or in some cases, having to endure a rigid regime of radiotherapy.

One of Brisbane’s leading dermatologists, Dr Greg Siller, is leading trials using an “infertile” cold virus which has been modified by the removal of some of its genes. 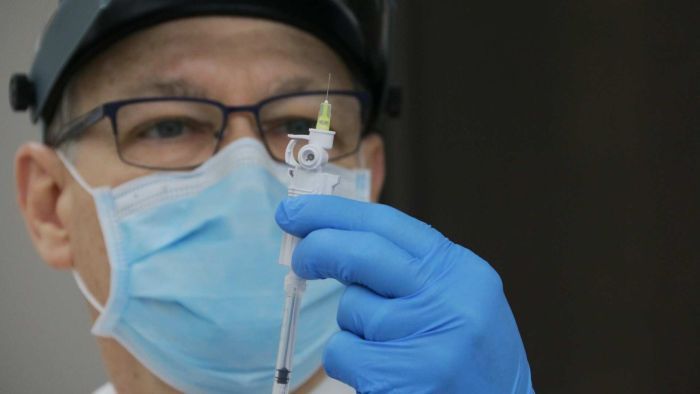 Siller, an adjunct associate professor at the University of Queensland’s Faculty of Medicine, said their first study, which involved a patient’s tumour being injected with the virus several times, had an unexpectedly high “cure rate”.

“We were delighted; not only did we achieve an 84 per cent cure rate on the target tumours but to our surprise, all of the other tumours on those patients showed evidence of immune activation,” Siller said.

“It appears we have stimulated the patients’ immune system to deal with some of these other BCCs, leading to reduction in size — and some were even cured.”

The common cold virus (adenovirus) that Siller has been modifying is very similar to the “virus platform” being trialled for a coronavirus vaccine at Oxford University.

But Siller’s research began more than four years ago, well before COVID-19 infected the world.

He said the genetically engineered “cold virus” is known to be safe as it is not possible to be replicated in a patient.

“It is effectively infertile, alive, and it affects cells but when it tries to multiply, it can’t,” Siller said.

“What we have done with this virus however is to not only make it sterile, we have spliced in human genes.

“[These genes] code for a cytokine (small proteins important in cell signalling) called gamma interferon, which is the protein that our body uses to fight cancers.

Siller said his patients often expressed disbelief when he told them he wanted to give them “a big dose of the common cold”.

“[I’m giving] a dose that would hopefully not only cure their cancer but stimulate the patient’s immune system to recognise and deal with any other basal cell cancers they have,” he said.

Norman Barns, 77, jumped at the chance to be part of this novel approach to treat his skin cancers in a second trial.

He has been diagnosed with many BCCs, having been a surf life saver on the Gold Coast in his early years, but it was a huge BCC on his face, which he was embarrassed by, that spurred him on to join the research program.

“It was big and ugly, unsightly and I could have had it excised with surgery but you wind up with a wound on your face,” Barns said.

Mr Barns recalled a flu-like reaction after the three injections that make up the trial, but said the side effects were minimal.

“The virus can make people feel like they have a cold — but they don’t,” Siller said.

“Those symptoms last for less than a day.”

It is currently used to treat advanced BCCs but has never been used in combination with the genetically modified “common cold”.

Six weeks on from his first injections, Mr Barns’ tumour has more than halved in size and depth.

The process is what Siller calls necrosis — the death of body tissue — which in this case, is a good thing.

“I’d say in the next couple of weeks it will disappear, miraculously,” Barns said.

“The actual result I think is just wonderful, I won’t have a scar on my face.”

Siller said he it was too early yet to refer to any treatment as a “vaccine” cure, but that was the research team’s dream.

“Our ultimate goal is to have the virus injection to produce — not only as a cure of BCCs but in preventing the development of any further tumours,” he said.

“You can call that a vaccination if you want, but it’s early days.”

Siller said he was looking for more trial participants, but they needed to have been diagnosed with a “nodular” or “solid” BCC between 6mm and 20mm in size.

He said recruiting participants during COVID-19 had not been easy.

“Imagine telling people you are going to inject them with a genetically modified virus in the middle of a pandemic,” he said.