In Tuesday’s federal budget, the Morrison Government set aside funds for COVID-19 vaccines to be available next year, a timeline that supports national and Queensland plans for economic recovery.

In addition to that funding, however, the government has “provided an indemnity to the suppliers of two potential COVID-19 vaccine candidates, covering certain liabilities that could result from the use of the vaccine”. This includes the University of Queensland vaccine candidate, marketed by CSL/Seqirus.

The nature of the deal remains unclear, however it comes as the federal Department of Health pushes ahead with plans for an enhanced vaccine surveillance and reporting system to accompany the roll-out of any COVID-19 vaccines. Some stakeholders have been pushing for a public compensation scheme to reduce the prospect of delays or manufacturer reticence.

It has also emerged that the Queensland government has been left to cover Paradise Dam amid controversial repair works that have already been the subject of legal action and an inquiry.

The Sunwater annual report, tabled recently in State Parliament, showed the water utility had effectively gone from having fully comprehensive insurance on the dam to only third party insurance cover. This exposes the government to greater risk, in addition to the cost of repairs.

“Sunwater’s insurers have declined to provide insurance policy coverage for the period 1 July 2020 to 30 June 2021 in respect of some elements of Paradise Dam in light of the structural issues currently being addressed at that site,” the report states. 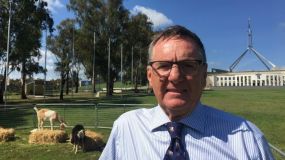 Insurance too dear for farmers as climate change ups premiums

“Specifically, Sunwater has been unable to obtain insurance policies relating to property damage to the dam and associated Sunwater assets, and for Directors and Officers Liability coverage for claims relating to Paradise Dam.”

The global economic climate and increase in natural disasters have already made insurers more risk averse, making policies more expensive, restricted, or unavailable altogether. The Australian Competition and Consumer Commission is due to report next month on whether the market or regulation can better protect properties and businesses in northern Australia. Some areas have become almost uninsurable.

Ahead of that report, the Katter’s Australian Party has made an election commitment to support the Strata Community Association in its bid for a national fund to help mitigate the cost of natural disasters and reduce premiums.

“I am challenging the incumbent Labor Government and the Opposition to speak up on this issue and tell Queenslanders, and particularly those of us being choked by this in the north, how they plan to address it,” said KAP leader Robbie Katter.

“In particular we would like to see them sit down with those from the industry and formulate an emergency plan.”