In March, six-month repayment deferrals — also known as mortgage holidays or pausing — were taken up by more than one in 10 people with a home loan. Now most need to start repaying, and new data paints a murky picture of what will happen next.

The Sunshine State holds nine positions in the top 10 regions putting mortgage payments on hold, based on credit and repayment data crunched by analysis company Equifax.

The company’s general manager, advisory and solutions, Kevin James said Australia is about to dive into the unknown. “We’re heading into this unknown puddle. How deep is it? What’s going to happen?”

The analysis was conducted this month on customers of the big four banks, which have written most of the $1.8 trillion in home loans Australians currently have outstanding.

“The impact of the downturn on tourist trade is acute for Australians living in tourism-dependent Queensland regions,”  James explained.

“Some of the deferrals could be people who are underemployed rather than unemployed … people trying to take the nervousness out of their situation.”

The only other entry in the top ten of areas most affected is the economically disadvantaged area of Broadmeadows-Tullamarine in Melbourne. 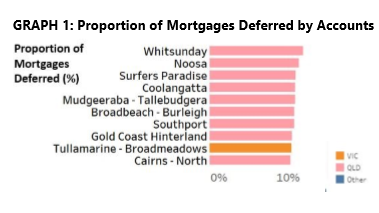 It matches the profile of areas in states beyond Queensland most affected, with low-wage workers, high unemployment and rocketing household indebtedness. And it is likely to get worse.

“Spending that disposable income in December combined with the excitement of [areas like Victoria] coming out of lockdown might prompt people to spend a bit more money.

“So will there be a bubble in Q1 [the first three months of the year]? That could be a real problem.”

Most areas on Melbourne’s fringe had heightened mortgage stress during May 2020, according to the analysis. Wyndham, Casey-South, Whittlesea-Wallan, Melton-Bacchus Marsh and Boroondara had a high number of mortgage deferrals compared to the national average.

Now mortgage customers in these areas are being contacted and asked to restart paying what is usually the largest single expense for households. There are no simple solutions.

“From a credit risk point of view … less risky people are coming out of the bucket,” Mr James explained.

“Those coming out leave those with a higher risk staying in … how are we going to get them out of there?”

NAB’s group executive for personal banking Rachel Slade is one of the people working that out.

“The big thing we’re hearing from our customers is still this overwhelming sense of uncertainty,” she said.

“The first thing I would say is that for any customer that can be restarting repayments they absolutely should. Second thing, if they’re concerned, they can definitely contact the bank.”

An extension of mortgage deferrals — another four months — is available, but banks are urging customers to only use the offer in rare situations.

“While there is that option, to extend the deferral, our perspective on that is that it should be the absolute last choice,” she said. “The first and other choices are to restructure the loan, to potentially move to interest-only payments, or lower levels of repayments for a period.”

The good news is that almost half of customers who deferred mortgages intend to revert to normal payments, according to new data from banking analysts at UBS.

An anonymous survey of almost 1,000 people with a mortgage found a further third intend to switch to interest-only payments, meaning they will be “servicing” the loan but will not be reducing the capital amount they owe.

But one-in-five intend to extend the deferral. And it gets worse from there.

“The credit quality of customers intending to ask their bank to extend their deferral is concerning,” the report noted.

“Of these customers we found: 40 per cent overstated their income in their mortgage application; 15 per cent understated other debts; 67 per cent are on [wage subsidy] JobKeeper; 25 per cent are on [unemployment benefit] JobSeeker.”

Both JobSeeker and JobKeeper are about to be trimmed back.

The full-time JobKeeper rate falls from $1,500 to $1,200 a fortnight and a part-time rate is being introduced that will halve payments for those working less than 20 hours a week..

That is a big issue, because incomes have already been smashed by the coronavirus crisis and the recession.

Customers who deferred mortgages were already much more likely to have lost income. That means customers who overstated their income on their original application are now in a much worse position than their bank potentially understands.

“An overstatement of income by around 20 per cent would suggest that their income is around 40 per cent lower than the banks had expected since the mortgage had been taken out,” the report warned.

UBS is suggesting a practice called “extend-and-pretend” could be the best option, essentially kicking the problem further down the road and hoping things improve.

It is urging banks to do “significant due diligence” before extending deferrals or moving people to interest-only loans.

That is because many borrowers are “likely to be under more stress than the banks perceive” and many “should be considered delinquent, in our view.”

In banking “delinquent” means someone who has missed at least one repayment, but not so many that the bank is yet calling in the loan and defaulting the customer.

The chief executive of the Financial Rights Legal Centre, Karen Cox, knows what people should not do: avoid the problem.

“People should be talking to their credit provider as soon as possible,” she said.

“Most credit providers — banks and other types of lenders — will be in the process right now of contacting as many of their customers as they can.

“I know it’s really natural to want to avoid those calls, it’s very stressful having to speak about money — particularly if you don’t have an answer about when you’re going to be able to pay.

“But the sooner you speak to your credit provider and give them as much information as possible, the sooner that some sort of arrangement can be put in place.”

With hundreds of thousands of home loan customers currently deferred, and banks trying to get them back to paying again, the process will not be easy or quick. Services like the National Debt Helpline, which Ms Cox helps run, are assisting people to make decisions.

“At the moment I don’t think they’ve ever been nicer than they are in the ‘hardship departments’ of those banks,” she added, “and they are very well resourced at the moment to deal with this particular crisis.”