One of Australia’s longest-hospitalised coronavirus patients has been discharged from the COVID-19 ward at the Gold Coast University Hospital, where he spent 77 days in intensive care.

Richard Misior was admitted to hospital in March after he contracted coronavirus on board the Ruby Princess cruise ship.

Despite initially showing only mild symptoms, the 81-year-old went on to spend six months in hospital and at one stage was placed in an induced coma.

The virus left Misior paralysed and unable to walk, talk or move.

“Suddenly it turned rather bad. They put me in ICU and of course I lost memories from then,” Misior said.

After waking from his coma, Misior struggled to move or communicate due to muscle loss.

“It was terrible,” he said.

“People [would] come and talk to me and I can’t talk, I can’t write.

“It was a hard slog and [there were] lots of difficult periods in between, but things are going well now.”

‘My lungs will never recover’

He said the virus has had a huge impact on his physical health.

“I have to work very hard to start recovering the movement, and my vision changed a bit,” Misior said.

“My voice virtually disappeared, my hearing got worse and my taste was ruined as well. “It has ruined my lungs and caused a lot of damage, so I need the oxygen supplement all the time.

“It’s getting better and better, a little bit, so I can manage at home with the portable oxygen machine.”

Misior said he felt very lucky to have survived and he was working with physiotherapists to regain the muscle he lost while paralysed.

The Gold Coast man will spend another few weeks in a regular ward of the hospital.

“It took a long time to recover, but after the first two months or so things got better, and from there on [I’m seeing] just gradual improvement all the time,” he said. “I will never have a full recovery … my lungs will probably never recover so I will need the oxygen supplement but it’s not too bad.”

He said the ordeal had been particularly difficult for his wife, who also contracted coronavirus but recovered much earlier. 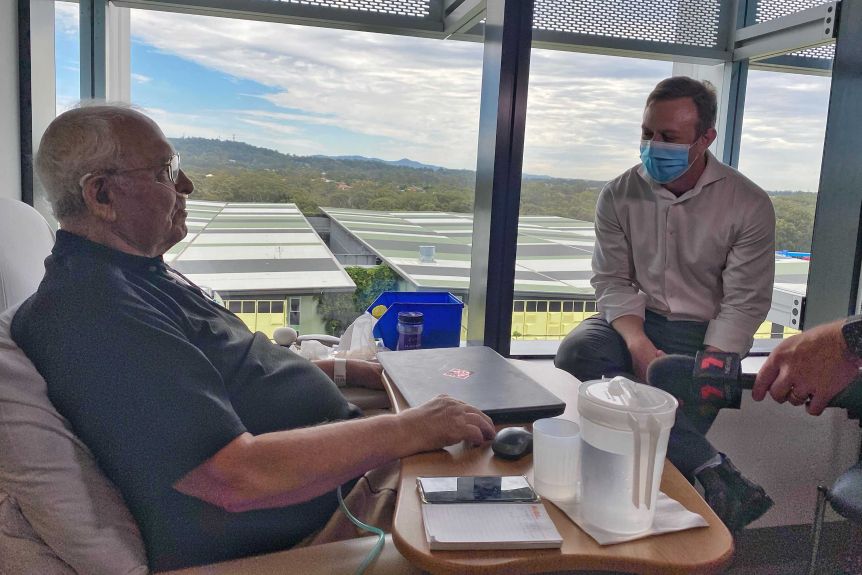 Health Minister Steven Miles visited Misior in hospital this week and said he had been receiving regular updates on his condition.

“You’re a real hero Richard, everyone knows about you and your story,” Miles said.

“It’s just so good to see you up and about.”

He said many patients who contracted coronavirus while travelling abroad had ended up in intensive care units and the majority had died.

Misior will soon be moved into a rehabilitation clinic, where his overall functioning is expected to improve.

“We’ll have to hope and pray that he will recover all of his functional state,” Dr Pathmanathan said.

Since the onset of the pandemic earlier this year, health professionals have learnt a lot about the virus and how to treat it — teachings that have saved Mr Misior’s life.

“We have adapted the evidence-based practice and … that’s why he probably survived,” Pathmanathan said.