“We’ve got the technology in the tags at Griffith [University] to put on to them.

“We’re trying to put a proposal together to get funding to put receivers and actually tag a lot of animals.” 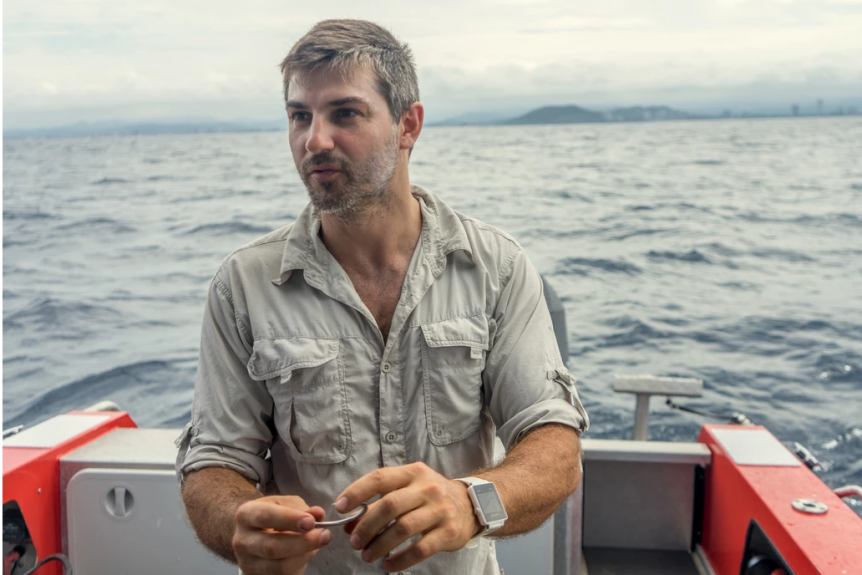 Gustafson said the biologging tags can be attached to sharks from four hours to two days and record footage while measuring the animal’s speed and depth.

He has already trialled the tags on a bull shark and a scalloped hammerhead.

The researcher wants to know how many sharks are migrating through Gold Coast waters or whether there is a resident population of certain species.

“We want to put more satellite tags on them to see how the Gold Coast bay is being used and by how many sharks,” he said.

There have been a number of shark sightings off the Gold and Tweed coasts in recent weeks including the fatal attack on 46-year-old surfer Nick Slater who was attacked and died at Greenmount Beach on September 8.

“We are seeing [an increase of] sharks off the coast of the Gold Coast, it happens every year,” Gustafson said.

“We’re getting all of the bait balls coming in, so this is one of the reasons why all of these sharks are coming in.

“As the waters begin to warm up we see the migration of large sharks, such as tiger sharks, coming in. We’re going to see hammerhead sharks coming in, there’ll be spinners and blacktip sharks.”

The marine ecologist said acoustic tags were being placed on sharks that are captured on drum lines in New South Wales, but little is known about the movements of many shark species in Queensland.

“For the Gold Coast and much of Queensland the only reliable source of data trends, or capture trends, is from the Shark Control Program because it’s been out there for 60 years,” Gustafson said.”It’s still quite loose data, but there is a positive trend for the last 60 years and that’s how we know that they’re coming in closer.

“We want to put on our long term tags, put out listening stations, so then we can actually figure out when they’re coming closer and we can fine-tune that seasonal movement.”

The CSIRO has been conducting research into the population of great whites that inhabit the east coast of Australia and New Zealand.

Dr Russ Bradford from the CSIRO Oceans and Atmosphere department said they use the close-kin mark-recapture method to estimate white shark numbers by taking tissue samples from captured sharks and extracting the DNA.

“You can get a really good estimate of how many adults are out there,” he said.

Bradford said the DNA is sequenced to discover the genome and that allows researchers to establish how many sharks are related in the east coast Australian population.

“It comes out that the adult abundance is about 750 animals,” he said.

Bradford said they can also gauge the population of juvenile great white sharks after the NSW DPI began tagging captured sharks in 2007.

He said juvenile sharks tend to swim closer to the coast and are more likely to interact with humans, rather than adult sharks which are found further off the coast.”When you add in the juveniles, the estimate for the eastern population is 5460 animals,” Bradford said.

The CSIRO researcher added that the population range could be as low as 2,900 sharks and up to 12,800.

“White sharks are distributed quite far and wide and it’s really difficult to physically count them,” he said.

“We don’t actually know the abundance of any animal on the planet — apart from the very few cases where there are only a handful of animals left in the wild.”