Edgar runs a business in which, for $10,000, he is engaged by people “knocking on death’s door” to go to their funerals or gravesides and reveal the secrets they want their loved ones to know.

“They’ve got to have a voice and I lend my voice for them,” Edgar said.

Edgar, a Gold Coast private investigator, said the idea for his graveside hustle came when he was working for a terminally ill man.

“We got on to the topic of dying and death and he said he’d like to do something,” Edgar said.

“I said, ‘Well, I could always crash your funeral for you’,” and a few weeks later the man called and took Edgar up on his offer and a business was born.

In almost two years he has “crashed” 22 funerals and graveside events, spilling the tightly-held secrets of his clients who pay a flat fee for his service.

Dressed in tailored pants and vest, Edgar said he was very respectful in the way he carried out his job.

“I actually blend in with the mourners,” he said. “I sit with the family and friends. I sit in the middle with everybody.”

In the case of his very first client, Edgar said he was instructed to interrupt the man’s best friend when he was delivering the eulogy.

“I was to tell the best mate to sit down and shut up,” he said. “He knew that he’d [the best mate] been trying to have an affair with his wife.

“I also had to ask three mourners to stand up and to please leave the service and if they didn’t I was to escort them out. My client didn’t want them at his funeral and, like he said, it is his funeral and he wants to leave how he wanted to leave, not on somebody else’s terms.” 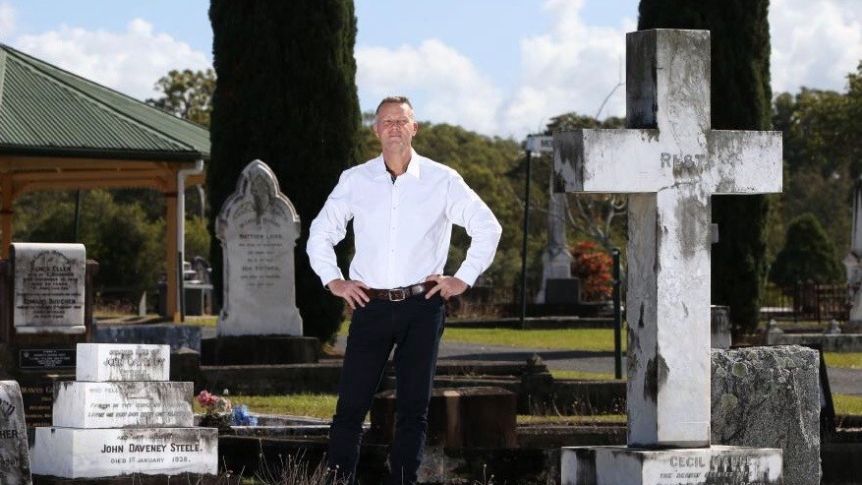 Despite the confronting nature of his job, Edgar said “once you get the crowd on your side, you’re pretty right” because mourners were keen to know what was left unsaid.

He said some clients never had the opportunity to reveal their secrets while they were alive.

“When people are knocking on death’s door, some of them are alone for six-to-12 months before they die and they never see anybody,” he said. “The worst thing of all is the ones they thought loved them the most become the biggest vultures in their life.”

He said his most confronting job was telling mourners at a bikie’s funeral that his client was gay and his lover was in the audience.

“They took offence to it but there was a number there that already knew,” Edgar said.

‘I told the priest to sit down’

Edgar said his arrogance was what made his job possible. He protects himself legally by recording his client’s confession and also provides them with a disclosure statement.

“Especially if I’m asked to go into a premises that the person used to own and get rid of some items that they don’t want their kids to find,” he said.

Edgar said while some were “dismayed and disappointed” by his graveside revelations, many were often well-received.

“Most people are happy because they’ve heard from the actual person that they love,” he said.

The unusual nature of Edgar’s job has caught the eye of the entertainment industry and he has signed a deal for it to be made into a movie or drama series.

‘I speak, or the deceased comes with me’

When priests and funeral directors have tried to prevent Edgar from delivering his secrets, he has not let that stop him delivering on his contract with the deceased. “I say, ‘Well, this is the contract I have with my client, if it doesn’t go ahead I take my client with me’,” he said.

“That means that I’ve arranged previously to have the body of my client taken away and cremated or buried at a private ceremony.”

Because ultimately his job was to respect his client’s wishes.

Dangers in ‘bombshells from the grave’

Psychologist Shona Innes said enlisting the help of a person like Edgar was the ultimate avoidance.

“It’s certainly not healthy,” she said. “I think it’s better to resolve these things while you are alive.”

Innes said paying a stranger to “drop a bombshell ” from the grave then leave a grieving family to deal with it could be very dangerous. “Grief is complex enough but something like this can complicate the grieving process for family and friends, she said.

“How [is he] taking care of these people?”