Australia Zoo’s Kat Hansen always knew Forest stood head and shoulders above the rest, but proving he was the tallest giraffe in the world was no easy task.

Despite their warm, gentle-looking brown eyes, Hansen said giraffes were “quite nervous animals”.

Setting him up next to a ruler to confirm his height took months of work.

“We had to make sure he was comfortable in the situation, as our top priority,” Hansen said.

“But encouraging him over with some food and making him stand up nice and tall with cameras rolling is quite a difficult feat.

“It took us a number of months to be able to do it.

“We ended up using a really large ruler and encouraged him to put his head up against that ruler with cameras coming from all angles.”

It was worth the effort though. 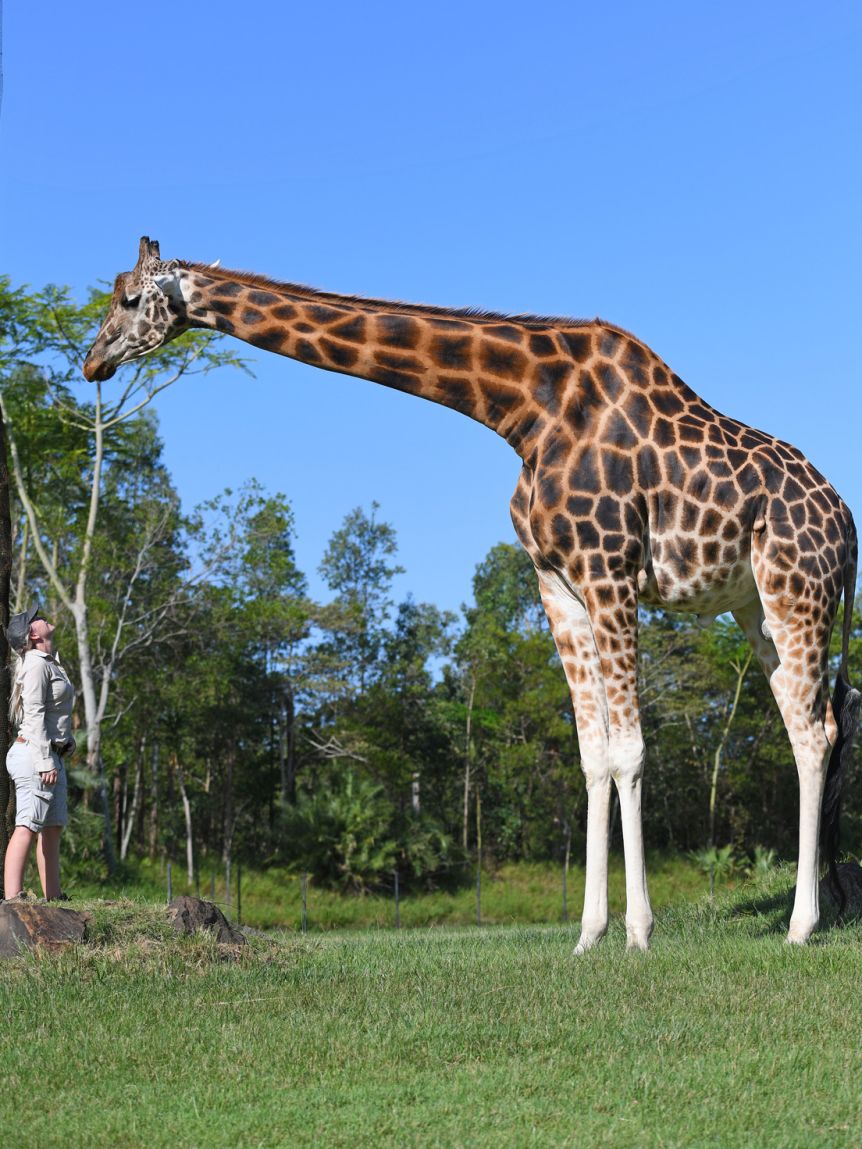 Forest has now been officially named by the Guinness World Records as the world’s tallest living giraffe standing at 5.7 metres.

“We never know what height he might eventually end up at,” she said.

Forest arrived at Australia Zoo when he was only two years old and a “lot smaller”.

Hansen has been working with him for nine years.

He is also quite popular on the lady front and has “three girlfriends” and is the father of 10 calves.

Hansen said Forest was essential to the regional breeding program.

“There are nine classified subspecies of giraffe which are vulnerable to extinction,” Hansen said.

“We are thinking there might be four distinct species.

“Forest was born in the Auckland Zoo as part of the regional breeding program to make sure of genetic diversity.”

Forest was not likely to take the award lying down — Hansen said giraffes seldom lay down, even when they were sleeping.

“They find lying down quite a nervous experience as it takes them time to get up,” she said.

“They sleep standing up … they have small sleeps for about 10 minutes.”

It was not just Forest’s height that made him different from the rest.

Hansen said each giraffe’s markings were totally unique, like a “fingerprint”.

Hansen said watching one of his babies being born was a “nerve-racking experience for the first time”.

As the babies were born while mum was standing, they would also drop to the earth from a height.

This was apparently part of the normal birth process.

“The baby has to hit the ground to get its heart pumping,” Hansen said.

Despite her years of training and working with Forest and the other giraffes, they were not the kind of creatures who would nuzzle up for a cuddle.

“We do lots of training and conditioning with giraffes,” Hansen said.

“They don’t necessarily enjoy cuddles, but we can touch them and ask them to put their feet up, so we can provide the best possible health care for them to live a long life.”