Victorian Public Tenants Association executive officer Mark Feenane said the more than 3000 tenants were unprepared for the surprise decision and many had been left without grocery and other supplies.

“It was just done in a pretty ham-fisted manner,” he told Nine’s Today Show on Monday.

“There was really inadequate notice to people who aren’t really well-resourced … no time to buy whatever essential items they needed.” 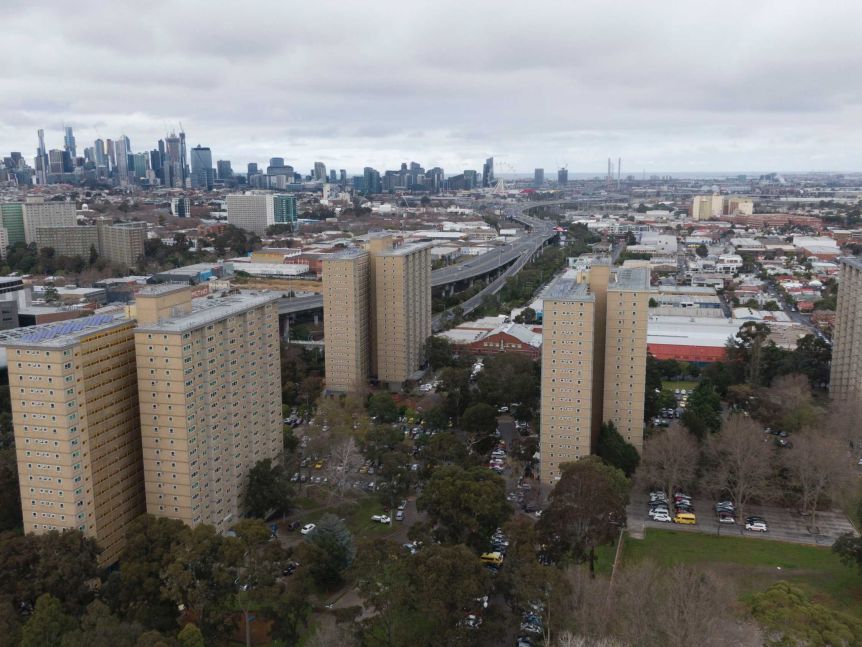 Police are guarding every entrance of the housing estates and residents are not allowed to leave their homes for any reason.

While the association welcomed the state Labor Government’s decision to waive rent payments for a fortnight, tenants believed they were being discriminated against.

“You kind of wonder what would the reaction have been if this would have been done in a high-rise, say a private high-rise in Docklands. Would they just give no people notice,” Feenane said.

The hard lockdown was imposed by the government on Saturday in a bid to contain a break out of coronavirus after 27 people in the North Melbourne and Flemington towers tested positive to COVID-19.

Victoria’s Chief Health Officer Professor Brett Sutton said the measures were in place because the environment was “desperately challenging”.

On Sunday, 27 cases had been detected across the nine towers in Flemington and North Melbourne, but Sutton said he expected there would be more diagnosed in coming days.

That’s the big reason behind the lockdowns — authorities are concerned about people who may be “incubating” the virus.

As well as the problems faced by residents of an apartment block in containing the spread, tenants have told the ABC about broken lifts making it “impossible” to safely distance.

Each one of the Melbourne tower blocks is home to hundreds of residents living in small units without balconies.

“Those towers have a large concentration of people in a small area,” acting Australian Chief Medical Officer Paul Kelly said on Sunday.”They are vertical cruise ships, in a way.

“And so we have to take particular notice and particular attention to make sure that the spread is minimised and that people are protected.”

The government says it will deliver food and medical supplies to residents, give a $1500 hardship payment to those who can’t go to work and pay $750 each to those not in the workforce.

The government wants every resident tested for coronavirus, and those who do so will have their payments fast-tracked.

One of the tower block residents, Thana Sirag, told AAP on Sunday her family had not received a care box or food.

Another resident Amr Osman tweeted a video of the box of food staples he’d been given, which included cereal and jam but no bread or milk.

Victoria has for weeks been grappling with an outbreak of coronavirus across various Melbourne hotspots.

The state racked up another 74 new cases on Sunday, bringing its confirmed infections total to 2536.

Twenty-six people are in hospital, including three in intensive care, out of 542 active cases.

Some 12 Victorian postcodes have been put into stage three lockdown until at least July 29 in order to prevent the spread of the virus.

Two of those areas, covering North Melbourne, Hotham Hill, Kensington and Flemington are home to the nine public housing towers.

Premier Daniel Andrews said the hard lockdown was about the safety of residents as well as the entire state.

“This is not about punishment, this is about protection for you and your loved ones,” he said.

“And then, by extension, it’s about protecting the entire state and we don’t make those decisions lightly.”