Prime Minister Scott Morrison will today unveil a greater focus on the Indo-Pacific region, warning Australia needs to prepare for a post-COVID-19 world that is “poorer, more dangerous and more disorderly”.

Morrison will also announce a commitment to spend $270 billion over the next decade on defence capabilities, including more potent strike weapons, cyber capabilities and a high-tech underwater surveillance system.

Over the next decade the Australian Defence Force (ADF) is expected to grow by 800 people, comprising 650 personnel for Navy, 100 for the Air Force, and 50 for Army.

Its budget was expected to grow to 2 per cent of Australia’s gross domestic product by 2020-21, “equating to approximately $200 billion in Australia’s defence capability over 10 years”, making the new announcement an increase of $70 billion to the department.

In a speech at the Australian Defence Force Academy, Morrison will argue the Indo-Pacific is the “epicentre” of rising strategic competition and “the risk of miscalculation — and even conflict — is heightening”.

“The Indo-Pacific is where we live — and we want an open, sovereign Indo-Pacific, free from coercion and hegemony,” a copy of the speech says.

Morrison argued increasing Australia’s defence capability was vital to shoring up the nation’s position in the region.

“The strategic competition between China and the United States means that there’s a lot of tension in the cord and a lot of risk of miscalculation,” Morrison told Channel Seven.

“And so we have to be prepared and ready to frame the world in which we live as best as we can, and be prepared to respond and play our role to protect Australia, defend Australia.”

In releasing the 2020 Defence Strategy Update and the accompanying Force Structure Plan, the Government is expected to confirm Australia will purchase the AGM-158C Long Range Anti-Ship Missile (LRASM) from the United States Navy, at a cost of $800 million.

The missile has a range of more than 370 kilometres and would be a significant upgrade from the 124 km range of Australia’s AGM-84 air-launched Harpoon anti-ship missile, introduced in the early 1980s.

Up to $9.3 billion will also be spent on research and development into high-speed, long-range weapons, including hypersonic weapons.

“Capabilities that can hold potential adversaries’ forces and critical infrastructure at risk from a distance, thereby deterring an attack on Australia and helping to prevent war.”

A massive underwater surveillance system using high-tech sensors and costing between $5 billion and $7 billion is one of the biggest new purchases which could eventually also include unmanned submarines.

Morrison has also promised to boost the ADF’s ability to deal with what he described as the “grey zone” — activity against Australia’s interests which falls below the threshold of traditional armed conflict. 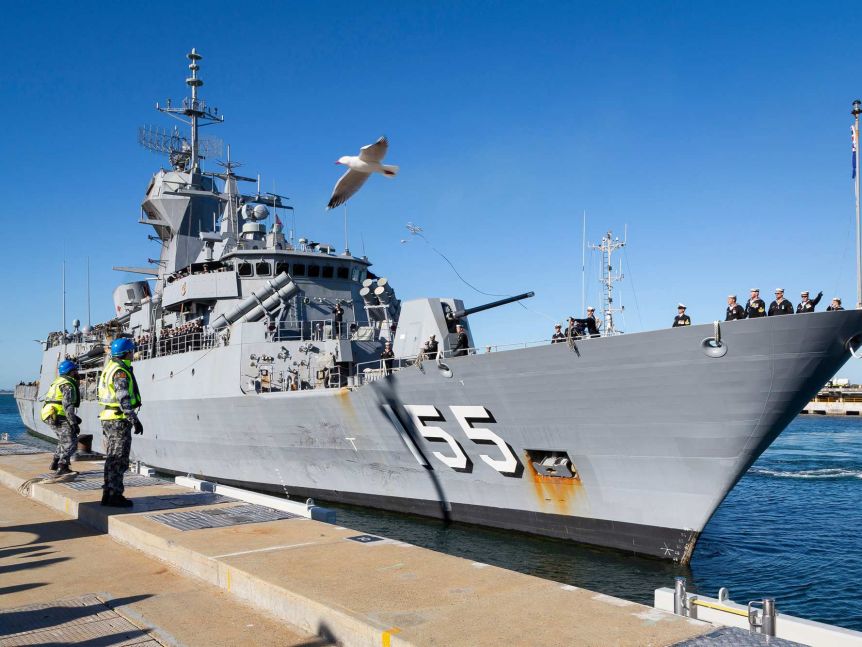 The Australian Navy is expected to grow by 650 personnel over the next decade. (Photo: Supplied: Department Of Defence/Kylie Jagiello)

‘We’re not talking about Canada’

Peter Jennings from the Australian Strategic Policy Institute (ASPI) said the world had changed dramatically since the last Defence White Paper was released, particularly in the era of COVID-19.

“What this policy document does is it starts to increase the hitting power of the Defence Force in the short term, rather than being focused on building submarines that will be ready in the late 2030s and into the 2040s,” Jennings told ABC RN.

Jennings said there was “only one country with both the capacity and the desire to dominate the Indo-Pacific region in a way that works against Australia’s interest”.

“We’re not talking about Canada,” he said.

“When they talk about the bad behaviour that’s happening in the region, the annexation of territory, coercion, the influencing of domestic politics, the use of cyber attacks – it’s really only one country which is doing that at industrial levels, and that’s the People’s Republic of China.”

The Government will spend $15 billion on cyber and information warfare capabilities over the next 10 years, $1.3 billion of which will be used to boost the cyber security activities of the Australian Signals Directorate and the Australian Cyber Security Centre.

Including a network of satellites for an independent communications network, $7 billion will also go towards improving Defence’s capabilities in space,

Morrison will say the 10-year funding commitment goes beyond the Government’s pledge to boost Defence spending to 2 per cent of GDP.