But Murphy says he is growing more confident a vaccine will be discovered among hundreds of “candidate molecules” being assessed by scientists worldwide.

Until then, he says he remains very conscious of the enormous economic damage inflicted on Australia — often on the advice he proffered to National Cabinet as chair of the Australian Health Principal Protection Committee (AHPPC), a powerful group of medical experts.

In a wide-ranging interview with the ABC to mark his last day as CMO, Murphy says it was “gut-wrenching” to see unemployment queues outside Centrelink after clubs, pubs, restaurants, gyms and some retail shops were shuttered following AHPPC’s advice in March.

ProMurphy will address his final National Cabinet as CMO today, ahead of becoming the Secretary of the Health Department next month.

He was to have started his new role on February 29, but the move was put on indefinite hold four weeks earlier, when the threat posed by coronavirus began spiking outside China.

It was Saturday, February 1 and Murphy was sitting at the kitchen table of his Melbourne home, poring over the latest infection statistics.

“I got the morning reports of the epidemiology and it was clear that the concerns that we’d had really for a week now that this virus had a lot of human-to-human transmission,” he told the ABC.

“On February 1 we realized it was spreading significantly outside Hubei Province and there was widespread transmission in other provinces of China.”

He was alarmed and picked up the phone to the Health Minister, Greg Hunt.

“I think we need to do what is not normal public health policy,” the CMO recounted telling the Minister.

“[The World Health Organisation] don’t support it … we need to try and stop importation, so we need to close the borders with China.”

It was a remarkable call to make. But in retrospect, it proved critical in controlling the virus, or crushing the “curve” as the catchcry became.

Hunt rang Scott Morrison, there were a series of urgent meetings and the Prime Minister announced the border to China would be closed to all non-residents at midnight.

“It was a very useful decision, I think, fateful maybe,” Murphy said.

“Border measures have been a very big part of our public health response and part of the reason why largely we’ve had a very successful response.”

The modelling of COVID-19’s possible spread was truly alarming.

Made public by the Prime Minister, albeit vaguely and with heavy caveats, at a press conference on March 15, the worst-case modelling suggested tens of thousands of Australians could be killed by the virus, and that if there was no mitigation strategy, infections could increase by 300,000 a day.

Murphy rejects the suggestion the modelling was designed to shock.

“No, it was designed to really just show what might happen if we did nothing — not that we were ever going to do nothing,” he said.

At the time, Murphy and the AHPPC were facing an army of “armchair epidemiologists”.

“We took what we thought was a proportionate middle ground and I think history has shown that that was largely correct.”

But Australia’s response has come at massive cost.

National Cabinet never rejected any advice or direction from the AHPPC, but some decisions were hard for the PM and premiers to stomach.

“The hardest thing for governments was the introduction of severe physical distancing measures because of the huge impact that had on the economy and employment,” PMurphy said.

“Two days after those measures were introduced, driving past Centrelink and seeing huge queues was gut-wrenching for me and for all the governments.”

Almost five months since closing the border to China, Australia is still a long way from being open to the world.

“To fully open the international border without any quarantining or any restrictions probably will require a vaccine to be able to adequately protect vulnerable people in the community,” Murphy said.

“Until that happens, we’re going to have some sort of border measures … and if we don’t get a successful vaccine in the relatively near future, then we have to re-evaluate.”

But he said he was optimistic a vaccine would eventually be discovered.

“I’m getting more confident. There’s so much effort going into vaccine development now, and there are literally hundreds of candidate molecules and a number that are in clinical trial at the moment, and I think it’s likely we will get a vaccine.

“How effective it will be, we don’t know.

“There may be more than one vaccine and so there’s a lot riding on that at the moment.”

Notwithstanding the spike of infections in Victoria, Australia’s relative success in combatting COVID-19 has challenged some of the precepts argued by the WHO, which didn’t declare COVID-19 a global pandemic until March 11, a fortnight after Australia had already done so.

“WHO is in a difficult position,” Murphy said. “This pandemic has rewritten some of the rule books.

“WHO said never close borders, that doesn’t help [but] those countries that have done well have closed borders.”

The PM wants an overhaul of the WHO, even proposing it be given the powers equivalent to those of a weapons inspector to avoid another catastrophic pandemic — a call that has angered China.

“[WHO] is a multilateral organisation trying to keep every member state happy,” Murphy told the ABC.

“I think they were also trying to balance the cooperation of countries with their statements … the Prime Minister has rightly asked for a proper, objective inquiry into the WHO’s leadership and we’ll wait to see what that shows.”

From obscurity to the nation’s family doctor

At 65, after decades of stellar professional success but relative public obscurity, Murphy’s had to deal with another phenomenon from the extraordinary events of 2020 — unexpected fame.

“I find it uncomfortable being recognised in the street, because I’m a relatively private person,” he said.

His appearances alongside the PM in astonishingly high-rating late-night press conferences, had Australians hanging off every one of his words as the coronavirus crisis prompted ever-tighter restrictions on life as we knew it.

“I’ve taken to wearing sunglasses and a hat when walking on the weekend on the occasion, so I can get out to have a walk, because people will come up to me — always positive and nice — but it’s sort of nice to be incognito for a while,” he said.

“I’ve got two granddaughters now — one that I’ve only seen on a couple of occasions because she’s new — but the older one has [become] quite addicted to watching me on the television apparently, and they play videos of granddad on TV.”

Life closer to the one he once knew awaits, away from the cameras and the daily TV bulletins, when he becomes Health Secretary on July 13.

Days since the last reported case of COVID-19 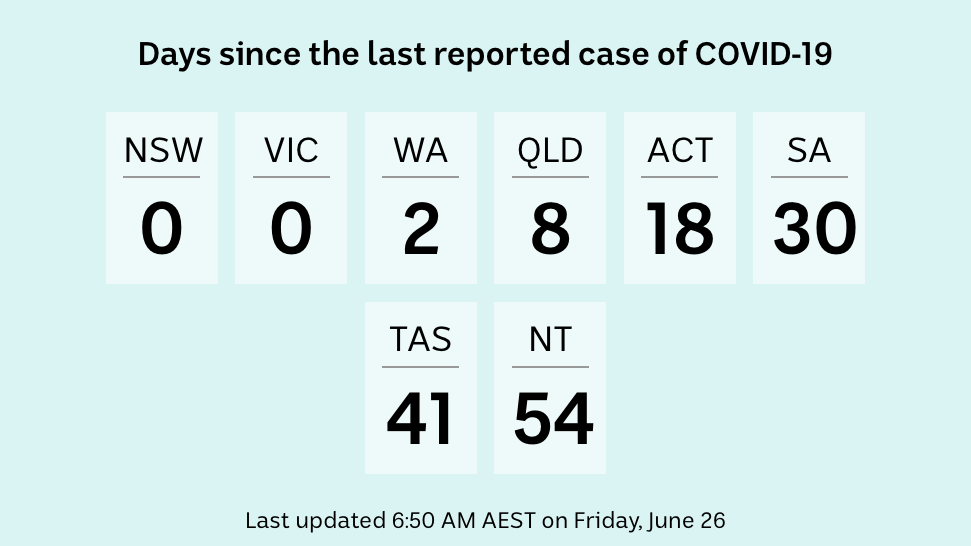 One of his deputies, each of whom have garnered their own profile in recent weeks, will take over Murphy’s responsibilities.

Professor Paul Kelly will begin in an acting capacity from Monday.

But some things won’t change for the man who for five months was the nation’s family doctor.

He can’t wait until it’s safe to hug his granddaughters.

“A little bit of affection might be possible but I think the most important thing is that people practise that physical distancing and hand hygiene for people that they’ve not met before and that they don’t know,” he said.

“We’ve got to keep doing that for the long haul.”