The Palaszczuk Government last week legislated a pay freeze for next financial year that will see negotiated wage increases for various public sector employees deferred for up to 18 months to allow about $500 million to be redirected into economic stimulus.

That threatened to short-change public servants who were expecting a pay rise of up to 2.5 per cent and planned to retire with that final salary factored into their calculations under Queensland’s defined benefit scheme. 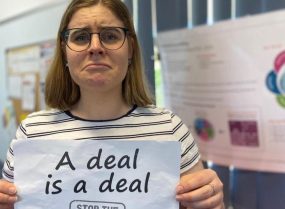 But Under Treasurer Rachel Hunter has told a parliamentary committee the pay freeze included a no-disadvantage clause “and the details of that are being worked through”.

“For those people who choose to retire, in that (2020-21) year, or where there are mandatory retirement age provisions, the commitment is they will not be disadvantaged,” Hunter said on Monday.

The Queensland Investment Commission told the hearing the superannuation liabilities remained fully funded but returns would likely fall 6.5 per cent this year, compared to a long-term positive trend of 8.1 per cent.

State Actuary Wayne Cannon said the latest estimate he had, from investment returns up to last week, showed a surplus position for superannuation holdings of around 110 per cent – lower than the previous trend of around 120 per cent, but not as dire as the 80 per cent recorded during the global financial crisis.

In the hearing, Hunter avoided giving specifics on how the freeze would save money, whether the state expected to go further into debt, and what impact state decisions such as border closures had on the economy.