A mistake could cost hundreds of millions of dollars in high-tech military might.

Flight Lieutenant Moulds said in those critical moments, her training and checklists kicked in to minimise any chance that something could go wrong.

And she ought to know — she is the first woman to have captained the RAAF’s refuelling beast, designated as KC-30A.

“You definitely draw on your training to make sure that you’re completely capable during those situations,” the Sunshine Coast local said. 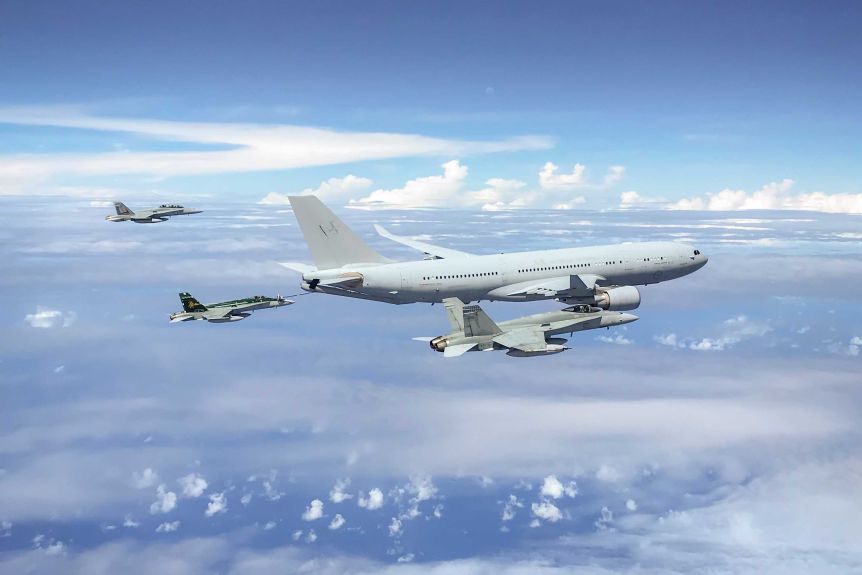 Her role was to fly the multi-role tanker transport through the Arabian Gulf into Iraq and provide mid-air refuelling for aircraft from France, Germany and the United States.

Moulds’ aircraft has been operating over Iraq and Syria since 2014 as part of the international coalition battling Islamic State.

As a modified passenger craft, it can also carry up to 270 people and 34 tonnes of cargo.

“Because it’s so large you’ve got to definitely accommodate for the bigger movements and on the ground as well when you’re steering.”

Flight Lieutenant Moulds was on assignment at the controls of the KC-30A as the world became gripped by the coronavirus pandemic.

But while she kept flying, all the other planes vanished.

“There was hardly anyone in the air, but you’re still there having to do your job,” she said.

“It is definitely quite eerie.

“It’s a very busy corridor with the Emirates so you’re used to seeing a lot of traffic and a lot of other aircraft in the sky.”

Moulds is enjoying the gentle winter conditions back home on the Sunshine Coast after leaving the Australian Defence Force contingent stationed in the Middle East for Operation OKRA as temperatures seared through the mid-40s.

She said she was now enjoying the Sunshine Coast’s blue-sky winter days, before she leaves town again later this week.

“The days here have been beautiful — I’m very happy.”