A team of researchers at Griffith University are changing the way we utilise water as a means for accommodation, research and urban extensions with the unveiling of project “Sea Manta”.

Professor Joerg Baumeister and research assistant Nikki Findlay from Griffith’s School of Architecture and Design and Cities Research Institute are behind the design and innovation of Sea Manta, a proposed 60m-long recreational and ecological structure that they’ve classed as a form of aquatecture.

The idea is to create a floating reef that creates its own rich and diverse marine ecosystem and boosts the diving experience.

Development of the design is an interdisciplinary approach between engineering, aquatecture, marine biology, coastal management and material experts from Griffith University.

Only taking a year to build, Sea Manta will sit half above water and half below water, with interactive aquarium displays, a kitchen, bar, dive shop and swimming pool, while below the waterline houses an artificial reef and dive experience.

Virtual renderings of the project have now been completed and Baumeister said he believed water structures could help coastal cities adapt to a changing world.

“Due to rising sea levels, coastal cities have to become more water-adaptive in the future,” he said.

“Therefore cities have to learn to accommodate and to expand towards the sea. Accommodating and expanding structures can include functions like dwellings, infrastructure and traffic, farming, and of course tourism attractions. This is what we call ‘SeaCities’ which is also the name of our research.” 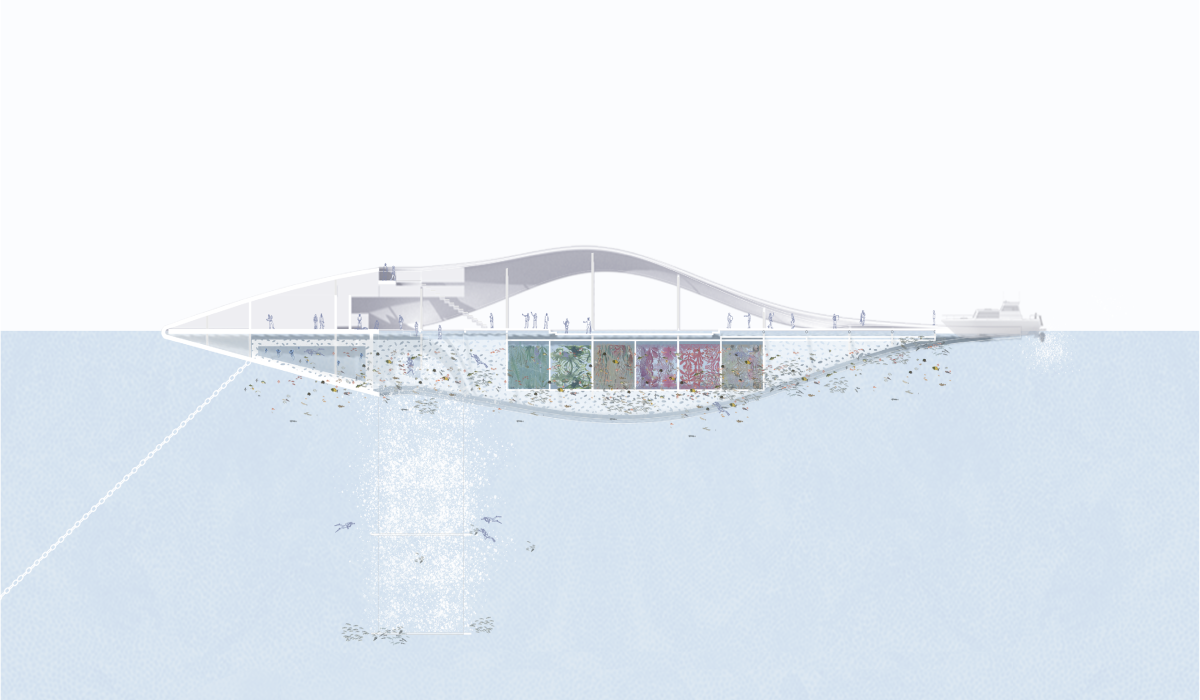 A section of the Sea Manta project (Supplied: Griffith University)

According to World Bank, more than 1 million Australians, and 400 million of the world’s population, live in land areas where the elevation is less than 5m metres above sea level.

Baumeister said this presented clear opportunities for more aquatecture projects in the future.

“In the case of the Sea Manta the advantages are obvious: The structure is not complicated to produce and build and dive tourism is very popular.  Its combination with newly created marine environments should make the market attractive.

“In general, water-adapted architecture is well known and highly successful in other parts of the world. Amsterdam, for example, has already a great floating village and Copenhagen plans an extension of the city with floating islands.

“This specific structure has been developed for specific climatic and marine conditions of the Arabic Gulf. Of course, the same idea could be also applied here in Queensland but the shape would differ due to the rougher marine environment,” he said.

The SeaCities research group, which is based on the Gold Coast, is planning to develop this market further on a domestic and international level.