The deluge provided some much-needed boosts to dams in the region, but the Bureau of Meteorology (BOM) said it wasn’t drought-breaking.

Some of the biggest rainfall was at Coolangatta, which recorded 201mm in 24 hours on Saturday.

In the past seven days, Coops Corner near Tin Can Bay received 407mm, while Brisbane got 220mm.

Myall Creek in Dalby on the Darling Downs fell below minor flood levels overnight after reaching a peak of nearly 3.2m yesterday.

Authorities said there had been minor impact from flooding to properties and businesses at Dalby.

Resident Charmaine Miller said she was caught by surprise by the flood yesterday.

“We were alerted at 4:00 by a loud horn and we jumped up, there was water everywhere, there was no time to move cars or anything so we continued to try and move everything as best we could,” she said.

A moderate flood warning is still place for the Condamine and Balonne Rivers.

The State Emergency Service received 473 callouts between Friday night and Monday morning, including 112 in Brisbane. 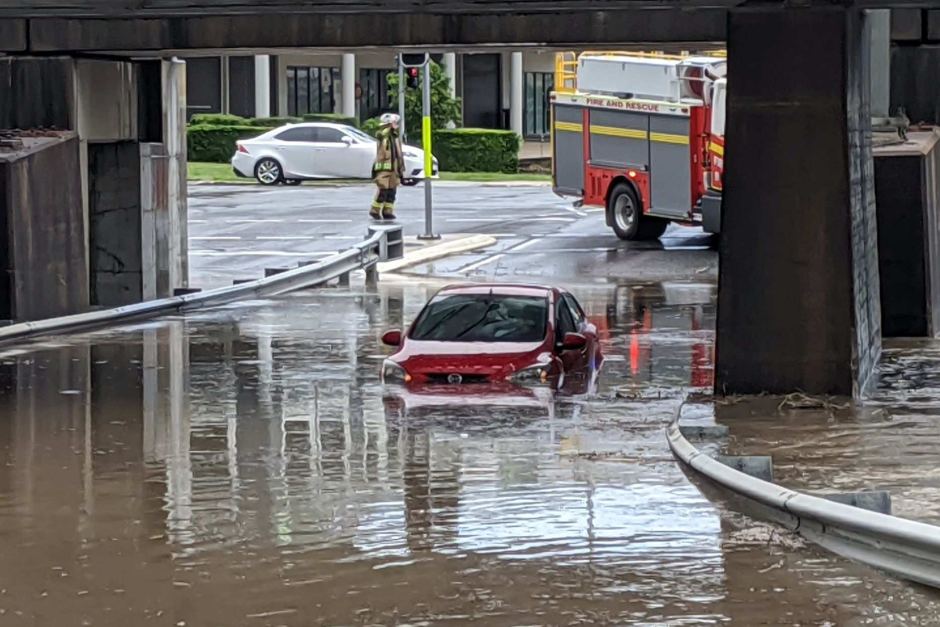 This car was caught in floodwaters at Moorooka in Brisbane on Sunday. (Image: Supplied: Claire Garton)

There were also 32 call-outs for swift water rescues over the weekend.

“They will increase as we go into this evening but we will start to see a little bit of sunshine between those showers and storms,” she said.

“Some of those storms — particularly as we go into this evening — there is potential for them to be severe again so we could see some more heavy rainfall but they are becoming a little bit more isolated.”

Pattie said it wasn’t enough to break the drought in the southeast and Darling Downs.

“It is still well below their average in terms of the amount of rainfall you’d expect over the last couple of months — so you still need a fair bit more rain,” she said.

“It is definitely not drought-breaking … and we need a little bit more before we get on to an even keel again.”

“You need multiple events for it to really soak in because we have been in such deficit.”

“Sometimes with flash flooding, that rain runs off and it is not captured as well as it could be,” she explained.

‘Everybody’s thrilled’ with water for dams

Water levels at Leslie Dam — the main water supply for Warwick — have increased.

Southern Downs Regional Mayor Tracy Dobie said it now had two-and-a-half years’ worth of supply — up from eight months’ supply at the start of the year.

“Everybody is thrilled with the rainfall,” she said.

About 70 to 80mm of rain was recorded over the Wivenhoe Dam catchment.

Seqwater said the grid capacity was now 57.7 per cent — up 1.8 per cent since the end of January.

Stanthorpe, which has been trucking in drinking water, got about 100mm of rain over the catchment of Storm King Dam.