Like many this Easter weekend, Gold Coast Mayor Tom Tate may pause to devote some of his time to religious observance.

The outspoken Mayor, accustomed to making headlines, may well seek divine direction over the furore that is consuming the Gold Coast over the influence exerted by his ratepayer-funded, evangelical spiritual adviser and her views that are cloaking the post in controversy.

Just how much ‘guidance’ Pastor Sue Baynes provides Tate and how deep her control is over the city’s chief decision-maker has sparked widespread outrage in the tourist capital, itself enjoying a revival as visitors return in droves this Easter after two pandemic-struck years.

In a shock to many of the city’s councillors, just weeks before the Easter break in council sittings, Tate appointed Baynes to his staff and opened a prayer room in council chambers. 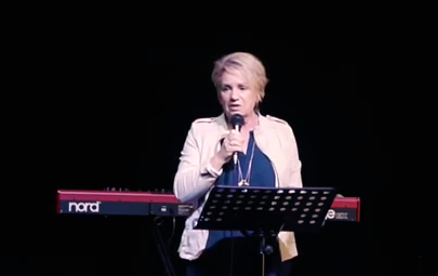 Pastor Sue Baynes has become a controversial figure on the Gold Coast over the influence she has over Mayor Tom Tate. (Image: YouTube)

Since the appointment, it has been revealed Baynes claims she communicates from God to the Mayor, by text.

She has labelled the iconic Home of the Arts (HOTA) cultural precinct a “demonic stronghold” and proclaimed she was engaged in a spiritual battle to shift “the enemy” and awaken the city to God.

“In a democratic society, anyone can have a personal view on any matter,” he said in a statement to News Corp.

“Equally, anyone can express that view through their own private forums such as social media.

“What is important is that city employees don’t allow those views to influence their professional work.

“The council advisor, engaged in a casual basis in this role, is undertaking exceptional community-based work to better unite all faiths and community groups working in areas such as homelessness and addiction. That is what is truly important to the community.”

However, videos, podcasts and interviews continue to surface showing Bayne claiming she deliberately seeks to exert influence over Tate.

In a podcast for Evangelism in Australia published on 30 March in 2021, a year before she officially became the city’s pastoral adviser, she revealed she wanted “a voice into what’s happening in the city.”

Baynes said she was inspired by the late evangelist C Peter Wagner, who advocated “spiritual warfare” and dominion theory. Dominionism and Wagner’s radical Christian movement the Seven Mountain Mandate (7M), aims to take over and transform society through “the seven mountains of culture”, which are education, government, media, arts, entertainment, religion, and family.

Baynes said she had been “very intentional” in engaging with community and business leaders to further the 7M doctrine, and after meeting with Tate found she could communicate directly to him from God.

“I very much hold him in prayer… I ask the Lord about what’s happening in the city and quite often the Lord might give me a scripture or something that might encourage the Mayor and I’ll send him a text message with that scripture and say what I feel the Lord is wanting to communicate to him.”

In a recording of a religious service in November, she accused HOTA of being a demonic stronghold controlling the flow of spirit to and from Surfers Paradise.

She said she met with Tate to pray to shift the enemy energy elsewhere. She also said she believed it was time to get out the “spiritual weapons” to “start claiming some things that are rightfully ours”.

Baynes has herself had a tilt at politics, running in previous federal and state elections.

She stood as a senate candidate for Family First in the 2016 federal election, opposing gay marriage as well as the Safe Schools program designed to create an inclusive environment and protect lesbian, gay, bisexual and transgender students from being bullied in school.

In a 2019 recording of Baynes addressing an Apostolic Reformation Australia brunch, she told how she first met Tate in his run up to the 2012 local government election.

She said she met with Tate, whom she subsequently baptised in a public ceremony at Evandale Lake near the City Council chambers ahead of the 2018 Gold Coast Commonwealth Games, and instantly converted him to the 7M philosophy.

“I believe that God gave me a Kingdom assignment. And He said I want you to help bring Kingdom sustained societal shift to the city. And I want you to do it in partnership with a civic leader of this city,” she said.

“God has given all of us a Kingdom assignment. When you get that assignment, that’s what you do.”