The reef “life support” breakthrough that blocks sunlight by spraying microscopic seawater particles into the air to help prevent coral bleaching, has proven successful in trials off Townsville.

But the technique, at the forefront of emerging environmental technologies around the world, already has critics hot under the collar who claim it unnaturally alters climate and fear it may have unintended consequences.

Cloud brightening project lead Dr Daniel Harrison of Southern Cross University said a team of researchers from university institutes, the CSIRO and the Great Barrier Reef Foundation were now launching an investigation into the impacts of cloud brightening, before taking it large scale.

The project that could be a pioneering lifeline for the 2,300-kilometre Great Barrier Reef and other endangered reefs worldwide, coincides with another major milestone for coral reef preservation.

University of Queensland scientists, working in a global partnership, today unveiled the world’s first atlas identifying all of the shallow coral reefs around the globe.

Based on three years of research, contributions from more than 450 research teams, and around 2 million satellite images, the first accurate global map that can be used to protect coral reefs around the world, called the Allen Coral Atlas, was released online today.

Only 25 per cent of reefs had been previously mapped. However, scientists say the future of coral reefs hangs in the balance as 50 per cent have already been lost to bleaching caused by increased water temperatures, ocean acidification, pollution and destructive overfishing.

The new atlas can now identify significant but previously unrecognised reefs and help with recovery of reefs damaged by cyclones or ship groundings, inform fishing regulations, identify pollution and run-off sources, and monitor other threats to coral reef habitats.

He said cloud brightening had the potential to protect the entire Great Barrier Reef from coral bleaching and could be used as an emergency response during marine heatwaves.

The technique aimed to shade the reef and lower temperatures of the water by making existing clouds brighter, or reflect more sunlight away.

“It’s effectively boosting a natural process because cloud droplets form over the ocean when moisture gathers around salt crystals and other minute particles stirred up by winds from the ocean’s surface,” Harrison said.

Instead of the process happening naturally, scientists spray microscopic sea water droplets into the air, creating a fog to provide shade from solar energy and seed the clouds so they can deflect more sunlight, he said. 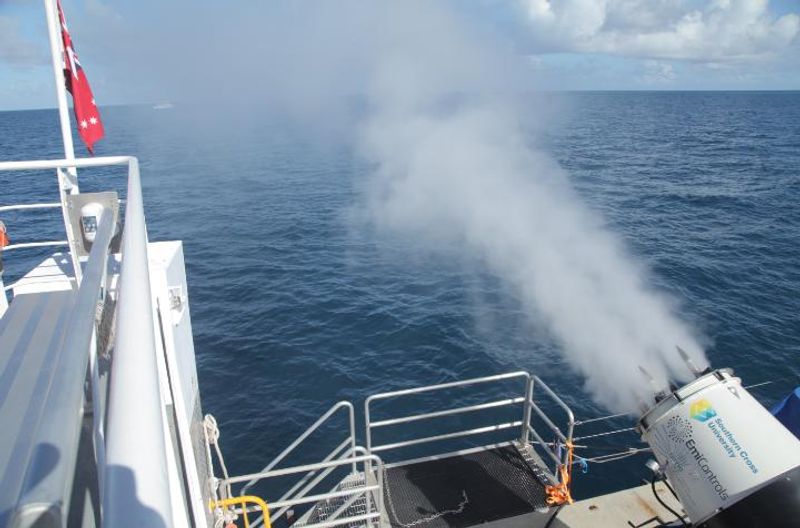 The cloud cannon jet sprayer releases a seawater plume off the back of the vessel (Alejandro Tagliafico/Southern Cross University).

The research group’s cloud brightening machine was attached to a Magnetic Island ferry for the trial off Townsville. It sprayed the tiny nano-sized salt crystals into the atmosphere in a massive plume using only about a shot glass of seawater per second.

“The real magic is that each of those nano-sized salt crystals, when it forms into a cloud droplet, grows about 500,000 times in volume if it gets incorporated into a cloud,” Harrison said.

“So that’s how such a small energetic input at the ocean’s surface can have such a large impact – those droplets that have grown 500,000 times in size reflect the sun’s energy away and we don’t have to do anything.”

The success of the trial, held in March this year although data is still being collated, caught the attention of global climate change scientists looking into new technologies that might rapidly cool the earth.

But equally, it has attracted protests from activists appalled by the implications of  controversial technological climate fixes, particularly in the field known as solar geoengineering.

Harrison said the controversy and suggestions that the project could change the natural climate system and weather patterns was “overinflated.”

“The research that had been done on this idea previously was all theoretical because no-one had ever tried it before. But it all concentrated on whether you could do this to cool the whole planet down,” Harrison said.

“But we’re actually scaling it down to just the size of the reef – but don’t get me wrong, that’s still an immense challenge…we’re doing it in a small area and only for a couple of months at a time, but the reef is still enormous, it’s the size of Italy.”

He said the new research would look at whether the technology was safe.

“There’s a lot of reasons why global geoengineering is controversial, and I guess because we’re using basically the same technology but in a different way, we sort of get drawn into that controversy.

“But I don’t think may people are against us using this technology to save something like the Great Barrier Reef,” he said.

“I think people are starting to realise we’re at the point where there is no path forward that is without risk. We’re at very high risk of losing the reef if we don’t do anything.”