If it goes to plan, Slattery and his “chief of the reef’’, former State Government Minister Kate Jones, will have their R&D done in three years and the first scalable and climate-change resilient coral reef in five years. The ultimate goal is 1 million square metres of reef.

And even he thinks it’s radical.

Slattery is throwing in between $5 million and $10 million of his own money to kick it off, but Jones will be driving the organisation. It’s why he brought her into his CapitalB family company.

“I told her I had two crazy projects. One was to build this backbone for Australia (the HyperOne data cable project) and the other was the Great Barrier Reef,’’ Slattery said.

“This has been a passion of mine that I have kept under wraps for a few years.’’

Jones’s job will be to take what Slattery calls his “brain dump”’ or vision and turn it into reality while he is running the myriad of companies he has started or helps, and for which he has a financial or ethical obligation.

“I think it will take three years to get the science right and an integrated reef in five years and then you go really large from there. The back half of that is 1 million square metres,’’ he told InQueensland.

His strategy coalesced around the realisation that the current way of thinking about fixing the reef and the damage caused by climate change and nutrient runoff was not going to see any results for generations. 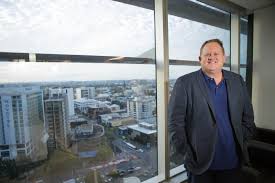 Tech entrepreneur Bevan Slattery has a quest to save the reef

He already has the fundamentals of how it will work because a lot of thinking that has already been done, but is not willing to reveal the secrets.

“It’s incredibly radical on a whole series of fronts,’’ he said.

But even though it’s radical he doesn’t expect opposition.

“If we are to make positive changes on the reef there are lots of small things we can do and we should absolutely keep doing them, but my focus is (creating) 1 million square metres of tolerant reef.

“The reason I set such a big target is because to do something on that scale you can’t take shortcuts. You have to solve this on an industrial scale.

“That’s what our focus is: how do we create a lot of intellectual property and energy and drive and innovation by thinking really big and thinking at scale? Because you know, the Great Barrier Reef is really the largest living thing on the planet.

“The key question is can we do what we do and industrialise it into a repeatable, low cost process,’’ he said.

“We don’t have to do it all but we have to work with scientists and the community for something that we can scale.

“There is an outcome that is massive.

“We will be putting a whole bunch of money into universities and leaning on them to do research that is funded by us and others to help us create the data and technology.

“They will understand the vision and how important what they are going is for the big picture.”

Slattery said he has used the process before in building data centres.

“You get this neat module approach.

“There are more elements to this but that’s what I am looking at doing – creating the module or a series of modules. Once you have got that you can go to people and say we are going to build this pilot or demo and we have done the science.’’

There is a big risk of public failure and it’s obviously something he thinks about despite the success he has had with companies like NextDC, Megaport and Superloop and an estimated wealth of about $550 million.

Despite that, he fails a lot.

And he jokes that it is “naivety and stupidity’’ that gets him into these grand schemes.

“Every time I do these projects I think, yeah I can do this and then you get half way through and you think: how stupid and naive was I?

“It’s just a million square metres. I am confident I can get there.

But it’s more than just throwing money at the problem and hoping someone else will work it out.

“I do have a vision. There has been a lot of thinking of how we get there but I’m not going to give away secrets.’’

Of course the cost would be significant but he said there was no shortage of people who would put their money into it. He just doesn’t want governments involved if he can help it because approvals slow down the process.

“I desperately want to achieve that million square metres.

“It will start a snowball. I will deliver it.’’