I got a call out of the blue from my friend in Redcliffe.

His usually cheery voice was sombre.

“Rebecca did you know that Barry Gibb had a niece called Berry?”

The Bee Gees story is marked by international success and sorrow. The family will be forever loved by Queenslanders and Berry’s premature death is another sad chapter. Her life was filled with adventure and love and that’s what now sustains her grieving mother.

Berry was a much-loved daughter to Lesley and niece to Barry in the Gibb family. She was 56 and fighting fit according to her mum who’s coming to terms with the loss of her first-born daughter from the opposite side of the world.

Berry’s husband Chino found her unconscious in bed in Las Vegas where their dog was still by her side, loyal to the end. Chino called Barry, who in turn called Lesley to deliver the devastating news.

“C’mon,” he said gently to his sister. “C’mon, be calm. We will take care of everything.” 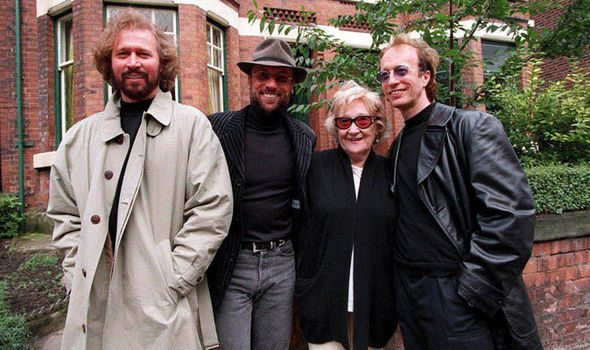 Gibb brothers Barry, Maurice and Robin with their mother.

Lesley is grief stricken and angry. She says her daughter became unwell not long after receiving her second COVID-19 vaccine. A doctor has since told the family that Berry died of a heart attack.

Coronavirus once again complicates the grieving process for a family spread across continents. There won’t be a funeral, Lesley concedes from her home in Australia. The situation in America too unstable and international travel so fraught that distant farewells must suffice.

I asked Lesley to tell me a little about her daughter who grew up witnessing the spotlight shining on her harmonious uncles.

Bernice was her birth name and she criss-crossed the world in the company of her extended family. Berry as she came to be known, was born in Sydney in 1964 and when she was just three years old, she and her grandparents and her uncles Barry, Maurice and Robin sailed to England.

Berry grew up calling her grandparents mum and dad, as did all the family. Maternal grandparents Barbara and Hughie adored Berry and when America beckoned for the Bee Gees, the family all moved to Los Angeles.

Berry was 12 and had her own performing aspirations. She attended the Debbie Reynolds School of Arts and wanted to be an actress. Her mum Lesley said she was a very good dancer.

Around the age of 18, Berry was on the verge of leaving America until her grandparents took the unusual step of adopting her so that she could stay and pursue her career.

Meanwhile her younger uncle Andy was performing more frequently in Las Vegas and the family eventually moved to Nevada. Berry met a young Marine called Chino and fell in love. And that’s where they lived happily for the last 31 years. Content with each other and their great danes. Until last Thursday when tragedy struck.

Lesley says losing her daughter doesn’t feel real. She said it reminds her of when Andy died.

“That killed me,” she says.
“I used to pretend he was still on tour. He would call me in the middle of the night and we’d talk.
“Because we lived apart, it was easier to pretend.”

Lesley is coping with her daughter’s sudden death by doing the same.

“Berry loved music. She loved her dogs. She was happy.”