Harry Wilson was still in cloth nappies in Gunnedah when Wallaby No.8 Toutai Kefu carried four or five All Blacks with him over the line to snatch the Bledisloe Cup in the dying seconds in Sydney in 2001.

So it stands to reason, Harry can’t quite remember that magical moment which unfolded in front of 90,000 fans and poetically, sent skipper John Eales out a winner in his final Test match.

The young Reds No.8, however, has watched the famous contest since. Quite a few times in fact. He’s watched all the Wallabies classics. COVID lockdown has been good for Harry’s unquenchable sporting obsession. Rugby, cricket, the South Sydney Rabbitohs win in the 2014 NRL final – there are some staples in life of which you can never have too much.

Comparisons in sport can often be futile – better suited to front bar banter and trivia night posturing than any meaningful analysis of athletic pedigree.

But there are already plenty of good judges drawing similarities between Wilson and 60-Test veteran Kefu, who the same experts some time ago anointed as Australia’s most impactful No.8 of the modern era.

Big, strong, aggressive, get-out-of-my-way types, far more likely to be brought to ground by four defenders than one.

Kefu has been aware of Wilson for quite some time. Not only was he at Gregory Terrace with Toutai’s eldest boy Josh, Kefu was an assistant coach at BBC in the two years Wilson played in the rival Terrace 1st XV.

It was Kefu’s job to come up with a plan to negate the strong running forward’s impact, something a lot of rival school coaches struggled to achieve in the same era.

“Yeah he goes all right doesn’t he? – phenomenal young talent,” the Wallaby great enthused. “When you’re talking to Harry, congratulate him on making an early charge up the list of great rugby No.8s. But remind him – there’s still daylight between him and me,” he added, tongue firmly in cheek.

That’s another similarity between the two – the sense of self-deprecation, perhaps borne out of growing up in a supportive family environment where confidence was encouraged, but not at the expense of humility. Couched another way, “take what you do seriously, just don’t take yourself too seriously”. Just as importantly, don’t complain. Add what you can to any situation, never detract.

As per the toddler in the nappy reference, Harry Wilson wasn’t born to be a Queensland Red. He grew up in “enemy territory” four hours south of the border. Gunnedah, population 9726, give or take a few itinerant sheep shearers.

It was there Cam Wilson, a branch manager for Elders, and his school teacher wife Mandy worked hard to raise their three boys – Sam, Will and Harry, born six years apart. The youngest had to fight for everything. Even at the dinner table, the rules were simple – It wasn’t yours until it was in your mouth.

“Uralba”, their 1350 acre property, “20 miles out of town” had everything three sport-loving adolescents could wish for – a mown footy field, complete with homemade goal posts, a cricket net, and at the back of their rambling four-bedroom home, a BMX bike track, complete with carefully sculptured banks and jumps. It was kid heaven.

But in 2009 came the reality of secondary schooling. The Wilsons wanted to give their boys every opportunity to learn and compete – and in that regard, Gunnedah, for all its cosy rural charm, was heavily short-suited. 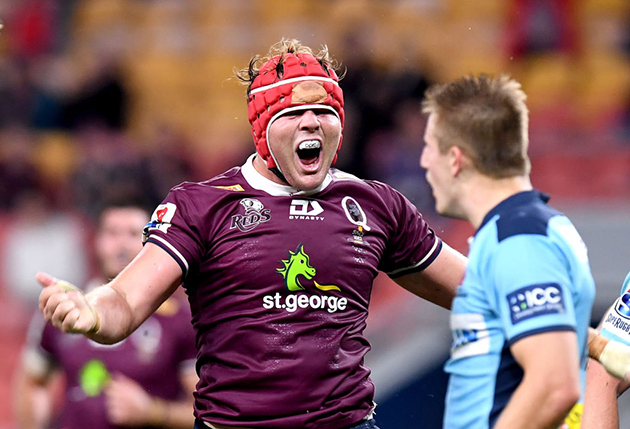 Harry Wilson celebrates scoring a try during the round 1 Super Rugby AU match between the Queensland Reds and the New South Wales Waratahs at Suncorp Stadium last year.

In early 2009, they packed up the family car and drove to Brisbane for an interview with senior teaching staff at St Joseph’s College, Gregory Terrace.

Young Harry, however, wasn’t going anywhere, at least not without a fight. Not after Dad had bought another 100m of poly pipe and doubled the size of the goalposts.

In the meeting with Terrace staffers, he carried on like a pork chop, hell-bent on convincing school officials that the Wilsons were not a family who should be welcomed inside the austere grounds of “Terrace”.

“I was an absolute disgrace,“ he said sheepishly. “I remember telling Mr Chapman ‘his school sucked’. I might have even used the F-word – anything that meant we could stay in Gunnedah!”

Fortunately, his parents quickly saw through the belligerence, and dispatched their obstinate youngest son to the nearest set of swings, while more civil discussions took place.

Eventually good triumphed over evil. The Wilson boys were enrolled at Terrace, and the following year, the family moved to Brisbane to start a new life in the “big smoke”.

For a long time, cricket – Harry’s first love – was his primary focus, but as his shoulders broadened, so too did his interest in rugby.

The rest, as they say is history – though the 35-ball century he scored as captain of the Terrace 1st XI suggests he might now just as easily be playing in the Big Bash, had he not pursued a career in professional rugby. Check it out on YouTube. And the comparative stature of his batting partner. Yep, Harry had a presence.

As unimaginable as 2020 was for practically everybody, for Wilson’s football career, it was “next level”.

He started the Super Rugby season as an unknown schoolboy, but after a couple of games, he had fans rifling through the Reds team list – “Geez – who’s the big kid in the red headgear? He goes all right”.

And go all right he did – four months later, still 12 weeks shy of his 21st birthday, Wilson was in the Wallabies starting side, his forceful running and high work rate acknowledged and rewarded by the national selectors. He featured in six internationals, adding steel, starch and flair to every aspect of Australia’s game.

On the eve of his second representative season, he looks back on 2020 with a mix of pride and disbelief.

“At the time I just concentrated on taking it all in, enjoying every moment,” he says. “It wasn’t until the end of the year when I had a bit of time to reflect, I started thinking: Holy shit. What just happened?!”

There was some surreal stuff along the way, like bumping into his childhood hero Adam Gilchrist, in the foyer of Sydney’s Crowne Plaza hotel, and chatting to him for what seemed like an eternity.

”He had no idea who I was – the Wallaby kit was the only thing that saved me from being a complete bandit,” Wilson says self effacingly. “But he’d watched us play the night before – he was asking me about the game – such a champion bloke. It didn’t seem right to tell him that I still had a poster of him on my bedroom wall!”

Well before his elevation to the national ranks, it was Wilson’s contribution at provincial level that helped breathe new life into rugby.

The emergence of he and other tyros – Liam Wright, Fraser McReight, Tate McDermott and Jock Campbell to name a few – triggered new hope among long-suffering Reds fans, the players’ back stories and strong affinity with the game locally all the more reason for supporters to climb back on board.

The back row combination of Wilson, McReight and skipper Wright (currently sidelined by an ankle injury) in particular is one that looks destined to serve the Reds well into the future.

Fittingly, the trio are as thick as thieves, spending as much time together away from the game as they do when they’re on the field, hunting as pack.

They have their own little group chat – “The Tea Club” it’s called – wherever they are touring, they’re out scouring the town for their afternoon cup of “cha”. McReight and Wilson also love coffee – Wright doesn’t drink the stuff. He’s the captain, so tea it is.

“I think that genuine bond really helps us on the field,” Wilson says. “There are a lot of situational relationships in professional sport – blokes bought together through circumstance. But I think the three of us will always be great mates. The plan is to stick together.”

The 21-year-old is under no illusion of the challenges that 2021 presents. Last year he was an unknown quantity – his opponents were just like the fans. Geez – who’s the big kid in the red headgear? He goes alright.

But approaching kick-off in 2021, Wilson knows rival coaches and players will have done their homework. They will have studied his running lines, examined his footwork in contact, and worked to nullify his trademark off-load in the tackle.

“It’s certainly going to be different,” he conceded. “But I can’t worry about that. All I can do is focus on improving my own game – being effective in everything I do.”

That starts with something Wilson first learned from his Dad down at Gunnedah, about the same time as the second, taller set of goalposts were being erected.

“Dad was always really good at switching on and switching off,” he says. “When he was at work, he went a million miles an hour.

But at nightfall, the moment that first beer appeared in his hand, it was tools town. Phone away. Family time.

“That’s how I’m consciously approaching my rugby. Switch on, switch off. When you’re playing or training – it’s on, big time. You can’t leave an ounce of effort out there. But in between, you need to chill out. Clear the head, do normal stuff with your mates away from footy. If you don’t, you’ll be cooked halfway through the season.“

The good news for rugby fans, it’s time to “flick the switch”.

The elusive quest for the Bledisloe Cup is once again about to be begin.

Sure, it’s been 20 years since the men in gold have lifted the famed silverware, but as the great Stan Pilecki used to say – “anybody can have a bad decade”.

Wilson and Co. are hell-bent on not letting it enter a third.