QUT adjunct professor and research fellow Dr David Flannery will join principal investigator Dr Abigail Allwood, a fellow Australian scientist now based in California, in guiding Perseverance on its journey after it – hopefully – has a soft landing.

In 2014, at the age of 41, Allwood became one of seven principal investigators chosen for the Mars2020 mission.

Allwood is the first woman – and Australian – to be a principal investigator on a Mars mission.

Flannery, who was then a post-doctoral student at Queensland University of Technology, worked alongside Allwood in the US for the first year of the project.

It will be Flannery’s job to guide the team of scientists on the mission where to go and which samples to take.

Now based back at QUT, he will play a pivotal role in the day-to-day operation of the rover and analysis of the data from the seven instruments that will be on board.

“I’ll be spending a lot of my time on trying to drive consensus within the team as to exactly where we go,” Flannery says.

Allwood says she has had a few “pinch me” moments in the lead-up to NASA’s Perseverance preparing to land later this week.

“Wow. My invention is going to land on Mars in a few days’ time,” she says.

She admits she has tried to stay very low-key since Perseverance launched back in July.

“I was a bit disappointed with the launch. To me it was just like another Zoom meeting,” she says over Zoom from her home in California.

“I’ve been trying not to get my expectations of what it will be like to see it land up too much because I don’t want it to be like that again,” she says.

But every now and then, the reality of the imminent landing sinks in.

“It’s unfathomable. I can’t quite believe it.” 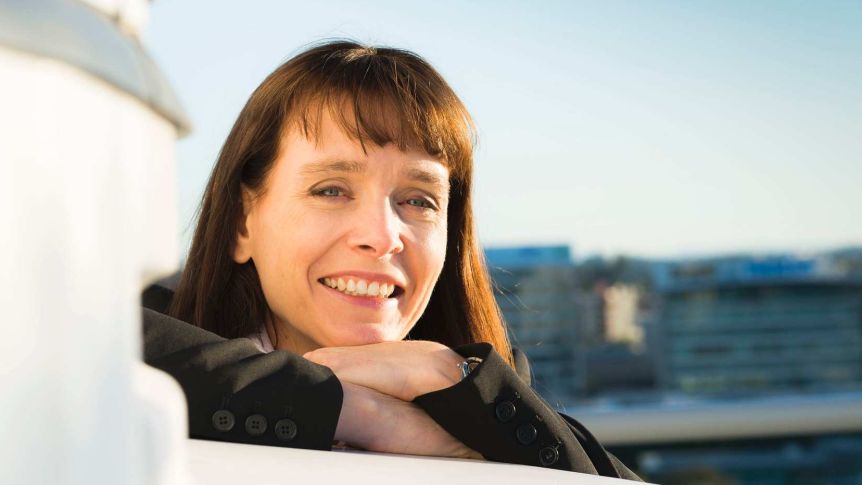 Abigail Allwood is the first woman and Australian principal investigator on a mission to Mars. (Supplied: Queensland University Of Technology)

NASA’s newest rover will attempt a daring landing on Mars about 7:55am (AEDT) on Friday morning.

In the most complex mission NASA has sent to the Red Planet, Perseverance is specifically tasked with answering the question of whether life ever existed on a planet other than Earth.

Perched on the arm of the robotic rover is a key tool called PIXL (short for Planetary Instrument for X-ray Lithochemistry).

This little box about the size of a large lunchbox is designed to take close-up images and scan a postage-stamp-sized area with x-rays, looking for chemical signatures of microbial life in 3-billion-year-old rocks.

The quest to find out whether life ever existed on another planet will not be easy, and the proof needed will be high.

But Allwood has already faced these challenges in her career: it is from her work in the ancient rocks of the Pilbara that the idea for PIXL was born.

Allwood first visited the area as a PhD student nearly 20 years ago.

She was drawn to the Pilbara by her supervisor, astrobiologist Malcolm Walter, who told her the rocks there were relevant to Mars.

“I thought that sounds really cool, I’ll go and do something about Mars,” she says.

But she had no idea about the “hornets’ nest” she was stepping into.

For years there had been furious debate as to whether or not the wave-like structures in a 3.45-billion-year-old rocky outcrop were fossil stromatolites — ancient mounds built by microbes — or patterns created by geological processes.

Her research, published in Nature in 2006, discovered the outcrop was just one structure right in the middle of a 10k-kilometre-long reef that could only have formed by biological processes.

“What that taught me was that when we go to Mars … you can never go in with this preconceived shopping list of what you have to find. You’ve got to look at the rocks that are there,” she says.

But back then there were still sceptics who challenged Allwood to provide evidence at the microbial scale to back up the claims.

“So I came over [to NASA’s Jet Propulsion Laboratory (JPL)] to work with them to figure out what it was that I needed to do to really nail this,” Allwood says.

In 2009, the team confirmed the structures in the Pilbara rocks were biological with a tool that scanned rock samples in the lab using predecessor of PIXL.

“For me, [proving the structures were stromatolites] was everything, for the rest of the world it was, ‘What? You already showed it with the Nature paper’.”

Allwood thought there could be potential to use the x-ray tool on Mars. But it was only a twist of fate that meant she ended up where she is now.

Around the same time, she got funding to develop a prototype, a joint mission with the European Space Agency to Mars tasked with exploring the question of past life and bringing back samples was announced.

“It was almost like the lining up of the cosmic holes in your Swiss cheese,” she says. But the mission was cancelled at the beginning of 2012.

It could have been all over, but six months’ later Curiosity landed with spectacular success and the tables turned.

NASA decided to run a new mission with a new spacecraft built from leftover parts originally designed for the Curiosity rover.

Allwood believes the twist of fate worked in her favour.

“If it had been the European collaboration mission, which was going to launch in 2018, there was no way known PIXL would have been ready,” she says.

“[And] they thought I was too young and there was no way that I could be the principal investigator of any such thing.”

With $US 1.3 billion in funding, work began in 2014 to develop a full-scale version of the PIXL prototype.

Flannery had also studied ancient rocks in the Pilbara, as well as South Africa.

“I was interested in looking for life beyond Earth and a lot of the things I worked on [at JPL] focused on Mars, because [it was] the best chance in my lifetime to apply my background to that question,” he says.

Flannery says getting funding was a major turning point for PIXL.

“We got to build our own lab, that was a very exciting thing to be involved in. It still is. To have a front-row seat in a mission like [Mars 2020] takes decades of planning. We really got lucky,” Flannery says.

“It was a very short fuse from being selected to now having an instrument operating on another planet.” 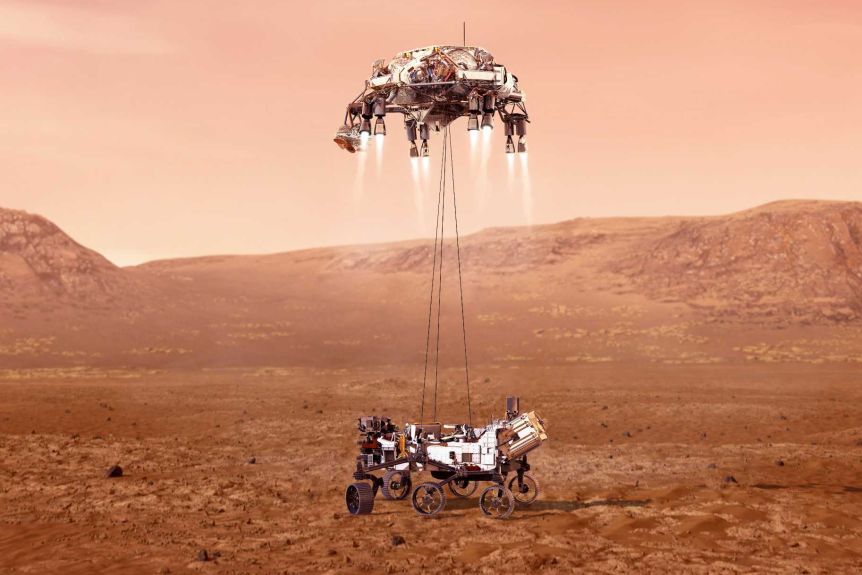 Perseverance is scheduled to land about 7:55am AEDT on Friday. (Photo: Supplied: NASA/JPL-Caltech)

In the space of five years, Allwood’s team overcame engineering obstacles to transform an instrument used on a laboratory bench to one that was compact enough to fit on the rover’s arm — and that could scan with precision — all the while adjusting for the movement of the vehicle and irregularities of the terrain.

“If you look at an early picture of [the] PIXL concept, it’s a completely different beast to what it is now,” Allwood says.

“It used to be a rectangular or nearly cubic-shaped box that had an instrument that would move inside. Now it’s like a little six-legged insect.”

While Allwood’s team has been working on PIXL, engineers at JPL and the Queensland University of Technology (QUT) have been building software to crunch the data as it comes down from Mars.

The plan is once data starts flowing about 90 (Mars) days after the rover lands, a team of 500 scientists in JPL and QUT will analyse data around the clock until at least April 2023.

“Australia will pick up where we leave off when California goes to sleep at the end of the operations day,” Allwood says.

“That’s so important because that makes PIXL more relevant to the whole tactical decision-making process, including the selection of samples.”

But first, NASA needs to land the rover on Mars.

Although NASA has landed successfully in the past, this is the most dangerous landing site yet attempted.

“Landing on Mars is really hard. Most Mars missions have failed,” Flannery says.

With COVID-19 rampant in the US, most members of the Mars 2020 team, including Allwood, will be watching the landing from home.

“I’ve been asked a lot about how the team feels and I don’t actually know because we are so separated,” Allwood says.

“That’s going to be terrible during operations because there’s none of that reading people you have when you’re face to face.”

If the rover lands without a hitch, Allwood’s team will have a couple of months before the science program starts.

The landing will be “pretty exciting” says Flannery, but he is already thinking ahead of the challenges that will come in the days and years afterwards.

“There are so many hurdles you have to pass through and none of them are the final hurdle,” he says.

“This thing could operate for 10 years potentially and [we could be] getting some really good science out of it. I won’t be happy until that happens.”