Quitting is one thing. Being forced out is an altogether different matter.On a personal level, there’s the humiliation and the inevitable recriminations. But when it comes to business transactions, it’s a complete disaster.

Just ask James Packer. Besieged by personal, relationship and mental health issues, he’s been trying to engineer an exit from his casino group Crown Resorts for years, desperately craving anonymity and a retreat from not just the corporate world, but the world at large.

Each time, however, he’s been thwarted at the final post, either by misfortune, mismanagement or an incredible combination of the two.

American-based giant Wynn Resorts walked away from a deal at the last minute two years ago after it suspected a high-ranking lieutenant within Packer’s empire leaked details of the sale in an effort to ginger the price.

Next in line was Laurence Ho’s Melco International, the Macau-based casino operator who for more than a decade had been Packer’s friend, confidante and business partner.

Rather than the cosy deal at what was then a bargain price, just a month after the Wynn purchase collapsed, the re-emergence of Laurence Ho — son of the infamous and now deceased Stanley — instead helped spark the inquiry that has forever tarnished Packer’s credibility and forced his hand at the table.

With Crown’s Sydney operation Barangaroo close to completion, NSW gaming authorities viewed the Ho connection with alarm and ordered an investigation following allegations that were aired by the Nine Network’s 60 Minutes.

Packer may now be forced to sell his 37 per cent stake in Crown down to below 10 per cent at whatever price he can get. His only other option is for a complete and hurried makeover of his corporate entity to satisfy the state government and casino regulators.

And it isn’t just James Packer under a cloud.

Apart from the large number of witnesses at the NSW inquiry whose memories seemed impaired, there is the curious matter of Victorian and Western Australian gaming authorities who for years turned a blind eye to high-profile reports — including a 2014 investigation by the ABC’s Four Corners — of corruption, criminal associations and money laundering.

There was one thing everyone for years seemed to have overlooked, including Packer. Back in the 1980s, when the NSW Government first entertained the idea of building a casino, Stanley Ho was banned from ever having any involvement in NSW. Reports of associations with triads — the feared Chinese organised crime syndicates — and accusations of money laundering had long plagued the casino mogul and stopped him from any international expansion.

So, in 2006, when James Packer and Laurence Ho put together a joint venture, Melco Crown, Stanley Ho rushed for the exits, handing over the keys to his Macau empire to Laurence.

While the family connection was enough to cause suspicions amongst regulators in America, it was assumed that Stanley, legally at least, had severed all ties with Laurence. Victorian regulators ticked off on the marriage, as did Western Australia.

But Stanley never really left the fold. A secret NSW Government banning list, released as part of the inquiry, revealed that the biggest shareholder in Melco just happens to be a Virgin Island trust called Great Respect. And Stanley was a beneficiary until his death last year.

This would never have come to light had Laurence and James not reconnected. They had wound up their Asian joint venture in 2017 after the debacle in China when all 19 Crown staff were arrested and detained for illegally promoting gambling.

Incredibly, for more than a decade Victorian and Western Australian regulators either overlooked or were unaware of the continued connection with Stanley Ho.

Even Packer was unaware.

“I had forgotten that,” he told the inquiry, when asked about Stanley and the Great Respect connection.

How they missed it is even more astounding, given a damning 2009 assessment from New Jersey gaming authorities into Pansy Ho, Laurence’s sister, which concluded that her connection with her father precluded her from having any involvement in the state’s gaming industry.

“Numerous governmental and regulatory agencies have referenced Stanley Ho’s associations with criminal enterprises, including permitting organised crime to operate and thrive within his casinos,” it reported. 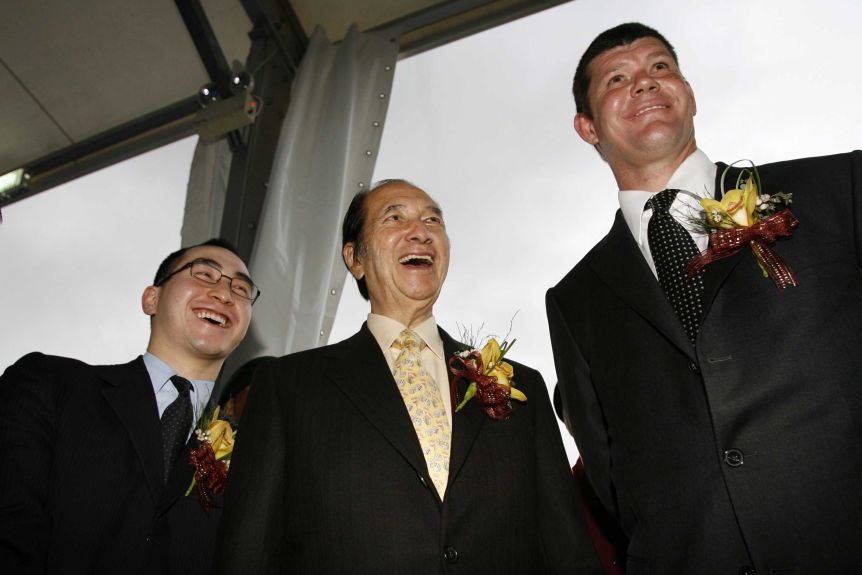 While the Bergin Inquiry found there had been no breach in the intended sale to Laurence Ho’s Melco, it also recommended a tightening of the laws and increased transparency around licensees, and their associates.

Macau connections aside, almost everything about Crown’s operations as revealed to the inquiry, from high rollers to general business activities, were cause for alarm.

The performance of key players left much to be desired. Neither Packer nor John Alexander, Crown’s executive chairman, for instance, were aware the company had “unofficial offices” in Guangzhou.

Then there were the startling revelations around the conduct of junket operators. A key recommendation from the inquiry is that they be banned.

In most parts of the world, and especially Asia, they are considered a normal part of business, often referred to as VIP operators. Rich punters are lassoed in, poured onto private jets, wined and dined and then tipped out and emptied upside down once at the gambling destination of their choice.

Stanley, however, changed the model. Rather than simply deliver the gamblers, he allowed the junket operators to run their own private rooms, a practice that facilitated money laundering.

While initially denying he knew anything about this, Packer was forced to concede that the 2014 Four Corners report named six operators with alleged links to organised crime delivering punters to Crown in Melbourne.

The biggest, Suncity, was run by Alvin Chau, who Packer met in 2015 and who since has been banned from entering Australia.

All of this begs the question: How will Sydney’s Barangaroo casino make money?

When the unsolicited project was approved by the O’Farrell government, it was supposed to be an operation for rich, foreign high rollers.

Since then, relations with China have soured and it is illegal to lure gamblers from the mainland. Now, with VIP tours banned, the commercial reality is that Barangaroo is looking increasingly like a lavish monument to waste.